Francisco Jose Garzon Amo, the driver of the Spanish train that derailed on Wednesday killing 78 people, has been formally detained, police say.

Francisco Jose Garzon Amo, who was injured and is under guard in hospital, is accused of “crimes related to the accident”, they say.

There are reports that the train was travelling at more than double the speed limit at the time of the crash.

Spain has declared three days of national mourning over the crash, one of its worst-ever rail disasters.

The police chief in the Galicia region, Jaime Iglesias, said on Friday that 52-year-old driver Francisco Jose Garzon Amo would be questioned “as a suspect for a crime linked to the cause of the accident”.

He added that Francisco Jose Garzon Amo could not yet testify because of his medical condition.

Police also put the confirmed number of deaths at 78 – down from 80 announced earlier. 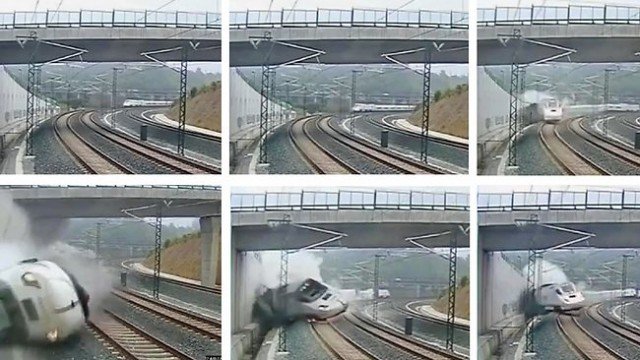 Francisco Jose Garzon Amo, the driver of the Spanish train that derailed on Wednesday killing 78 people, has been formally detained

They said the difference arose because human remains had been wrongly identified in the initial stages.

At least 130 people were taken to hospital after the accident near the north-western city of Santiago de Compostela, and 95 are still being treated.

The 32 seriously injured include children. People from several nationalities are among the wounded, including five Americans and one Briton. One American was among the dead.

The president of railway firm Renfe, Julio Gomez Pomar, was quoted by El Mundo newspaper as saying the driver had 30 years of experience with the company and had been operating trains on the line for more than a year.

Renfe said the train came off the tracks about 3 or 4 km (2-2.5 miles) from Santiago de Compostela station at 20:41 local time on Wednesday.

It was on the express route between the capital, Madrid, and the port city of Ferrol on the Galician coast, with 218 passengers on board and four crew.