Anthony Weiner’s online mistress Sydney Leathers, the political wannabe at the center of the mayoral candidate’s latest texting scandal, pleaded guilty to possession of marijuana and appeared before Vanderburgh Superior Court, Indiana, in 2008.

Sydney Leathers, 23, had dropped out of Mt Carmel High School without graduating the previous summer.

And until just three months ago, Sydney Leathers was being pursued through the small claims court for close to $2,000 in unpaid medical fees in a case that lasted two years.

In an interview with Inside Edition, Sydney Leathers revealed Anthony Weiner told her he loved her and claims he even consulted her before deciding to run for mayor. 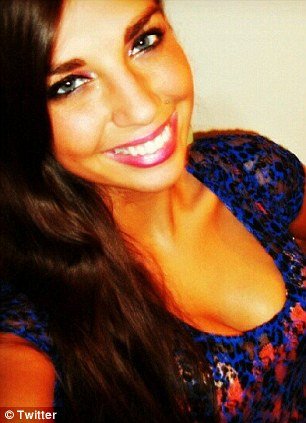 “You told Anthony Weiner that you loved him?” Sydney Leathers was asked, according to a statement from Inside Edition.

“Did he tell you he loved you?”

“Yes,” she replied, adding that she was embarrassed by the whole thing.

“I feel embarrassed. I wish I could go back and change it but I know that I can’t so I just have to live with it. It’s embarrassing but it was how I felt at the time, and how he felt at the time,” Sydney Leathers said.

Sydney Leathers also started crying as she apologized for the hurt she has caused to Anthony Weiner’s wife Huma Abedin.

The revelation came as high school friends of Sydney Leathers described her as someone who was always desperate for fame just as it emerged she had got herself an agent and was hoping to make $100,000 by selling her story.

Sydney Leathers hoped Anthony Weiner would be her ticket out of “Conservative Hell” Indiana and alleges he promised to put her up in a condo in Chicago and a possible job at Politico.

She lives with her machinist father in Princeton and had a difficult relationship with her thrice-married mother since they split six years ago, it also emerged today.

Sydney Leathers’ mother Laura only learned about her daughter’s involvement with Anthony Weiner when the story broke nationally and are said to be still trying to absorb the shock.

On Wednesday, Laura Leathers blasted Anthony Weiner and his run for office.

“I have nothing to say except God help New York if he gets to be mayor. You can print that,” she told the New York Daily News.

It also emerged yesterday that Anthony Weiner and Sydney Leathers’ online relationship started when she emailed him in 2011.