Former President George H.W. Bush has shaved his head to show support for a boy who has leukaemia.

A Secret Service agent in his security detail has a two-year-old son who is losing his hair as a side-effect of treatment for the cancer. 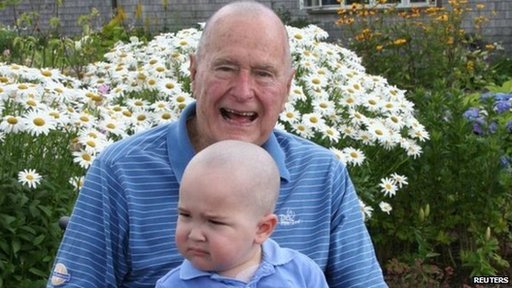 George H.W. Bush has shaved his head to show support for a boy who has leukaemia

George H.W. Bush, 89, lost his greying locks earlier this week at his coastal home in the state of Maine, said a spokesman on Wednesday.

The former president acted after he saw other agents in his detail had shaved their heads.

A spokesman for George H.W. Bush identified the toddler only as Patrick.

The security detail have launched a website to help pay for Patrick’s medical treatment.

Republican George H.W. Bush, whose son is former President George W. Bush, was only himself released from hospital in January, two months after his admission for a bronchitis-related cough.