His wife Gu Kailai was jailed in August for the killing of the Briton, Neil Heywood.

Bo Xilai was charged by prosecutors on Thursday in Jinan in Shandong province, state media said.

The Bo Xilai scandal, which exposed corruption claims and infighting at the top of the Communist Party, was one of the biggest to rock China in years.

He is also charged with embezzling public money, Xinhua said.

The sending of the formal indictment to a court in the city of Jinan suggests the trial is now imminent. 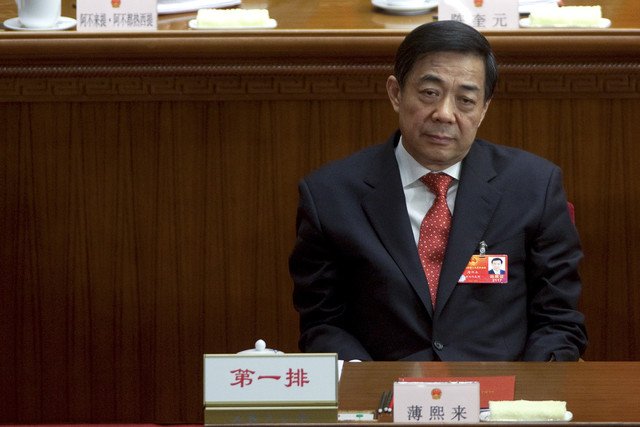 Bo Xilai has been charged with bribery, corruption and abuse of power

However, no trial date has been announced yet.

Bo Xilai was previously considered a rising star in the Communist Party, and one of the country’s most powerful officials.

However, he came under criticism after his former police chief, Wang Lijun, fled to the US consulate in Chengdu in February 2012, spending a day there.

Wang Lijun made allegations about British businessman Neil Heywood’s death while at the consulate, reports said.

Neil Heywood had died in Chongqing the previous year. The Wang Lijun incident prompted an investigation into his death.

His wife Gu Kailai was charged with Neil Heywood’s murder, and given a suspended death sentence, which is usually commuted to life imprisonment in China.

Bo Xilai was popular in his role as party chief in Chongqing.

He was known for two high-profile campaigns: a large-scale crackdown on crime, and a drive to promote China’s old communist values.

Despite his charisma, his penchant for the limelight set him apart from other Chinese politicians.

According to analysts, Bo Xilai’s ambition and flamboyant style earned him enemies and was considered controversial by party leaders.

Bo Xilai’s populist brand of Maoist nostalgia, such as his encouragement of the public singing of old communist songs, was seen as dangerous by China’s more reform-minded leaders.