Pope Francis has warned against drug legalization plans in Latin America during the inauguration of a clinic for drug addicts in Rio de Janeiro.

The roots of drug abuse should be tackled, he said on the third day of his visit to Brazil.

Uruguay is close to allowing the legal sale of marijuana, with other countries pondering similar liberalization.

Earlier, the Argentine-born pontiff celebrated the first Mass of his trip, at the Shrine of Our Lady of Aparecida.

He warned tens of thousands of faithful against the “passing idols” of money, power and pleasure.

After the visit to Aparecida, in the Brazilian state of Sao Paulo, the pope flew back to Rio de Janeiro.

At the inauguration of a drug rehabilitation clinic at the Sao Francisco hospital, he hugged former addicts and heard their stories. 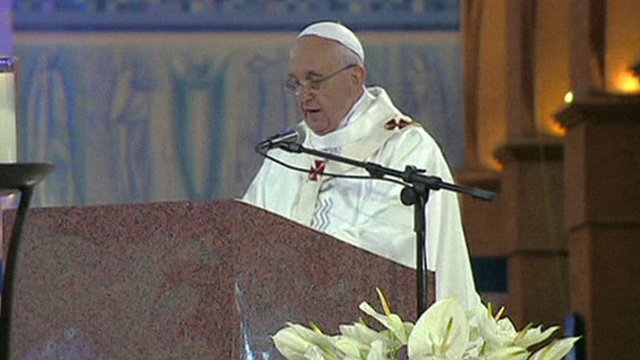 “It is necessary to tackle the problems which are at the root of drug abuse, promoting more justice, educating the youth with the values that live in society, standing by those who face hardship and giving them hope for the future,” Pope Francis said.

“How many dealers of death there are that follow the logic of power and money at any cost! The scourge of drug-trafficking, that favors violence and sows the seeds of suffering and death, requires of society as a whole an act of courage,” he said.

Leaders in Colombia, Bolivia, Ecuador and others have spoken for softer stances on drugs policy.

In Uruguay, a project decriminalizing marijuana sale is set to be voted in Congress next week.

The pontiff is in Brazil to attend the Roman Catholic World Youth Day festival. It is his first trip abroad since becoming head of the Catholic Church in March.

The highlight of the five-day festival will be a prayer service on Rio’s iconic Copacabana Beach on Thursday.