Tunisian opposition leader Mohamed Brahmi has been assassinated outside his home in Tunis, officials say.

Mohamed Brahmi, 58, led the nationalist Movement of the People party.

It is the second time an opposition party leader has been killed this year.

In February, prominent secular politician Chokri Belaid was also shot outside his house in Tunis. His murder sparked protests and forced PM Hamadi Jebali to resign.

An uprising in Tunisia in late 2010 kick-started a series of revolutions that spread through the Middle East and became known as the Arab Spring.

Gunmen on a motorbike shot Mohamed Brahmi in his car in front of his wife and daughter on Thursday morning, Movement of the People party officials said.

Local media said the assailants fired 11 bullets at the politician. It is not known yet who was behind the attack.

Mbarka Brahmi and her daughter Belkis were joined by angry Tunisians outside the hospital in Ariana where the politician died. 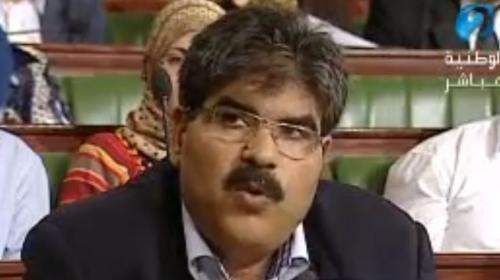 Mohamed Brahmi has been assassinated outside his home in Tunis

Large crowds also gathered outside the Ministry of Interior in Tunis in protest at the killing.

There are also reports of demonstrators converging in the city of Sidi Bouzid, Mohamed Brahmi’s hometown and the birthplace of the Arab Spring.

The governing Islamist Ennahda party expressed “sadness and shock” at the assassination, which it described as a “cowardly and despicable crime”.

The killing came as Tunisia celebrated the 56th anniversary of becoming a republic after gaining independence from France.

Mohamed Brahmi founded the Movement of the People party after the 2011 revolution.

He was also a member of the National Constituent Assembly, which is drafting a new constitution.

The assembly announced Friday would be a day of mourning.

Mohamed Brahmi was not as big a political figure as Chokri Belaid, but he too was a leftist critical of Ennahda.

The party has faced growing popular unrest over a faltering economy and a rising extremist Islamist movement.

After Chokri Belaid’s assassination in February, many Tunisians accused Ennahda of not doing enough to stamp out a rise in Islamist violence, with some critics saying the party was actively fomenting it, correspondents say.

The party denied the accusations.