Brody Jenner and his strained relationship with stepmother Kris Jenner may have reached a new low point as he wants his father Bruce Jenner to divorce the momager of the Kardashian clan, according to new reports.

The tenuous relationship between Brody Jenner, 29, and Kris Jenner, 57, was apparent during a recent episode of Keeping Up With Kardashians in which the whole family went on a Greek vacation.

Now insiders claim relations between Brody Jenner and his stepmother have soured to the extent he want his father to divorce her, RadarOnline reports.

In Sunday’s episode, the Kardashian matriarch initially upset her stepson by failing to invite him on the Mykonos trip – saying he never responded to invitations – but later booked him a flight at Bruce Jenner’s request. 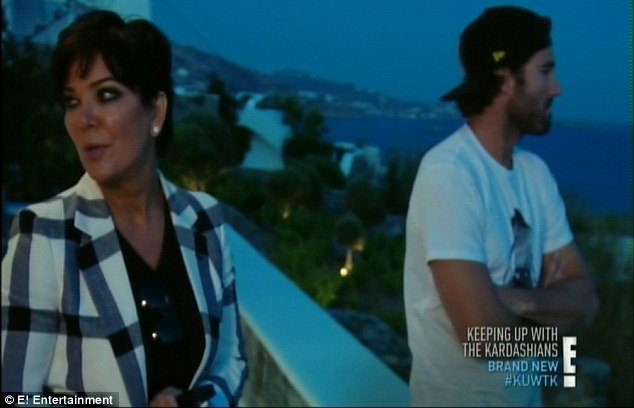 Brody Jenner has a strained relationship with stepmother Kris Jenner

A source told RadarOnline that Brody Jenner has grown used to being snubbed.

“Brody has had a lifetime of this and he holds Kris responsible for Bruce not being a bigger part of his life when he was a child,” a source told in an article published on Tuesday.

Brody Jenner “wishes his dad would just divorce Kris. Bruce and Kris are leading separate lives and don’t even share a bedroom together anymore”, the insider said.

“He has been spending a lot of time at his Malibu rental without Kris. Brody wants to be closer to his dad, but it’s very hard with Kris in the picture, because she always has to make everything about her,” the source added.

Elsewhere during Sunday’s episode, Kris Jenner told Brody during an awkward dinner at their ocean-view villa: “I’ve been trying to reach out to you and you don’t even respond.”

“I’ve got to give you my right info then,” Brody Jenner replied, claiming she must have the wrong number.

“I wouldn’t blatantly ignore you.”

Brody Jenner also expressed concerns over his father’s living arrangements as brother Brandon told him they no longer slept in the same room.

Pondering the sleeping arrangements at their Greek villa, Brandon Jenner said: “I wonder if Dad and Kris are going to share a room. They don’t share a room at home anymore.”

Brandon Jenner and his wife Leah explained that Bruce got a separate place to have his own space because he only had limited space at the family mansion.

“That sounds like a nightmare. Poor guy,” Brody Jenner replied.

Brody and Brandon are Bruce Jenner’s two sons from his former relationship with Linda Thompson.