Carole and Michael Middleton are the first visitors to the Duke and Duchess of Cambridge after the birth of their son.

It is understood the family will leave hospital on Tuesday evening or on Wednesday morning.

Gun salutes in Green Park and the Tower of London and the ringing of bells at Westminster Abbey have marked the birth of the third in line to the throne.

The King’s Troop Royal Horse Artillery fired a 41-gun salute in Green Park at 14:00 BST, after riding past Buckingham Palace.

At the same time, the Honourable Artillery Company – the City of London’s army reserve regiment – fired a 62-gun salute from Gun Wharf at the Tower of London. 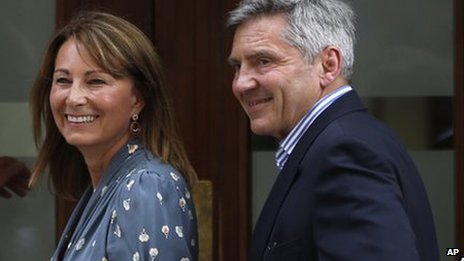 Meanwhile, the church bells of Westminster Abbey, where William and Catherine were married in April 2011, began ringing out – a celebration set to last for three hours.

They were greeted by its lead clinician, Jonathan Ramsay, and paused briefly on the steps for the mass of photographers gathered outside before going inside.

Prince William was at the hospital for the birth at 16:24 BST on Monday, and stayed with his wife and son overnight.

Kensington Palace said in a statement: “Mother, son and father are all doing well.”

The couple said: “We would like to thank the staff at the Lindo Wing and the whole hospital for the tremendous care the three of us have received.
“We know it has been a very busy period for the hospital and we would like to thank everyone – staff, patients and visitors – for their understanding during this time.”

Prince William had earlier said the couple “could not be happier” following the birth of the 8lb 6oz boy.

There has been no word yet on what Kate Middleton and Prince William plan to name the royal baby.