The King’s Troop Royal Horse Artillery and the Honourable Artillery Company carried out the ceremonial of gun salutes to mark the birth of the royal baby.

Gun salutes are fired for the birth of every prince or princess, no matter where their place is in the line of succession. The last royal salute for a birth was for Princess Eugenie in 1990.
The King’s Troop Royal Horse Artillery, wearing full dress uniform, paraded past Buckingham Palace on the way to Green Park, where they staged a 41-gun royal salute.
They went from their forward mounting base in Wellington Barracks into Green Park, where 71 horses pulled six First World War-era 13-pounder field guns into position for the royal salute at 2 p.m.
Each of the six guns fired blank artillery rounds at 10-second intervals until a total of 41 shots were fired. The horses and riders then collected the guns and escorted them back to Wellington Barracks.
Major Mark Edward, commanding officer of the King’s Troop Royal Horse Artillery, said: “The opportunity to mark the birth of the child of the Duke and Duchess of Cambridge by firing a 41-gun royal salute, comes as a huge honor for the King’s Troop Royal Horse Artillery.”
The Honourable Artillery Company (HAC), the City of London’s Army Reserve Regiment, also fired a 62-gun salute from Gun Wharf at the Tower of London at 2 p.m.
Whilst a royal gun salute normally comprises 21 guns, this is increased to 41 if fired from a royal park or residence.
Uniquely, at the Tower of London, which is a royal residence, 62 rounds are fired as this also includes an additional 21 guns for the citizens of the City of London to show their loyalty to the monarch.
Bells also sounded at Westminster Abbey in celebration of the royal birth, with the three ringers having performed the same task for the new Prince’s father more than 30 years ago. 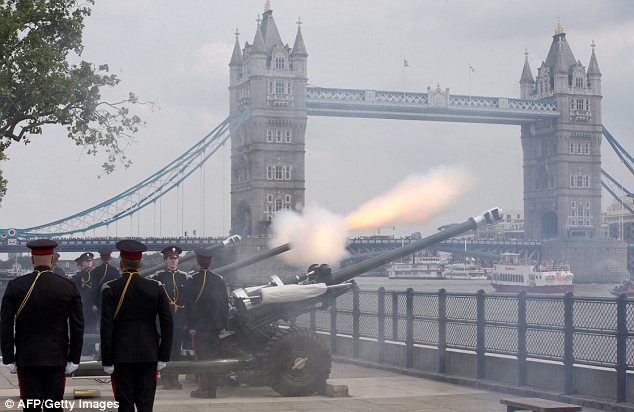 When Prince William was born in June 1982, Clarke Walters helped ring a peal at the iconic church in central London in honor of the newest member of the royal family.
Clarke Walters said it was ‘wonderful’ to now be performing the peal for Prince William’s own baby son.
He also rang the celebratory bells for the Duke and Duchess of Cambridge’s wedding at the Abbey two years ago.
A team of 10 from the Westminster Abbey Company of Ringers rang a full peal on the Abbey’s 10 bells from 2pm to coincide with the gun salute in Green Park.
The complex peal is made of 5,000 changes, and known as the Cambridge Surprise Royal and lasts for over three hours.
Clarke Walters said: “It’s always a great honor to ring at the Abbey especially for a big occasion like this one. It’s a bit of a thrill even though I’ve been ringing for more than 30 years.
“I do love the connection that three of us rang the peal for William’s birth, the same three were in the wedding peal and the same three are here today. That’s a nice link back to William.”
Celebrations are not confined to London, as all of Her Majesty’s ships – in home or international waters – are flying the Royal Navy Ensign flag from their mast to mark the birth of the prince.
HMS Lancaster, deployed on a patrol task in the Caribbean, added its own congratulatory message to the Duke and Duchess, spelling out “It’s A Boy!” on the deck of the ship.
Staff from RAF Valley, where Prince William serves as a search and rescue pilot, were among the first to offer their congratulations.
Station commander Group Captain Adrian Hill sent a congratulatory message to the couple on behalf of the RAF Valley.
“We’re all delighted to learn that Flight Lieutenant Wales and the Duchess of Cambridge are now proud parents of a new-born son,” he said.
“We wish them all the very best for the future. From everyone at RAF Valley, congratulations.”
The Ministry of Defence said other units connected to Prince William also marked the birth, including the Army regiment he was commissioned into from Sandhurst, the Household Cavalry, which is partly deployed in Afghanistan.
The Irish Guards, of which Prince William is the colonel, toasted the birth with a traditional glass of Irish stout at their barracks in Aldershot and at bases in London.
Kate Middleton visited the battalion this year and last year to present shamrocks to all ranks on St Patrick’s Day, a role carried out for many years by a female member of the Royal Family.
Trafalgar Square’s famous fountains were lit with blue lights last night and London mayor Boris Johnson said they will be lit for the next six days in celebration of the royal birth.
Westminster City Council celebrated the announcement of the baby boy’s birth with blue lighting in the fountains in Marble Arch and the Golden Jubilee Bridge. They will remain lit up until midnight tonight.