Home World Europe News Royal baby’s name: Alexandra is the favorite for a girl and George...

The royal baby’s impending birth is good news for bookmakers as thousands of people have rushed to place bets on everything from the child’s name to its due date, weight, gender and eye color.

Most wanted to bet on the baby’s name and bookies said George and Alexandra are the hot favorite names for Prince William and Kate Middleton’s baby.

Other strong contenders from Prince William’s family include Elizabeth, Diana, Charles and Philip.

The Duke and Duchess of Cambridge are also likely to take inspiration from Kate’s side of the family, possibly honoring her father Michael, or picking Francis, which is both her father and her grandfather’s middle name.

Meanwhile James, another very strong favorite if the baby is a boy, has links to both families.

Bookmakers also said punters – who have spent an estimated £1 million ($1.5 million) betting on the baby – were expecting the baby to be a girl, weighing between 7 lb-7lbs 15oz, and to have brown hair.

Once the baby is born the Queen will be informed of the chosen names before they are announced officially, but she is unlikely to exercise her veto.

Royal writer Christopher Warwick said: “The Queen is so down to earth that she’s not likely to jump up and down and say this boy has got to be called Charles and George.

“It’s much more of a personal thing these days.”

Despite their freer rein, it is unlikely that Prince William and Kate Middleton would pick a name out of keeping with royal tradition, and they will be mindful of choosing a name that befits a future king or queen.

In the past, the approval of the sovereign has held great importance.

When the Duke and Duchess of York had their second daughter Princess Margaret Rose in 1930, they were planning to call her Ann Margaret, but changed their mind after learning that King George V disliked the name Ann.

Queen Victoria insisted that the name Albert be used as a middle name, if not a first, in honor of her beloved consort Prince Albert.

Royal babies’ names are not usually revealed straight away and the public are often left guessing for several days as speculation mounts.

When Princess Beatrice was born in 1988, it was two weeks before her name was known.

When Prince William arrived in 1982, his parents waited seven days before deciding upon and announcing his name. Princess Diana was thought to have preferred names such as Sebastian and Oliver, while Charles was reportedly holding out for Albert.

Charles’s own name, however, remained a mystery for an entire month and was only declared ahead of his christening in the Music Room of Buckingham Palace in December 1948.

In a more modern approach, Prince William and Kate Middleton could buck the trend and unveil their chosen name immediately. 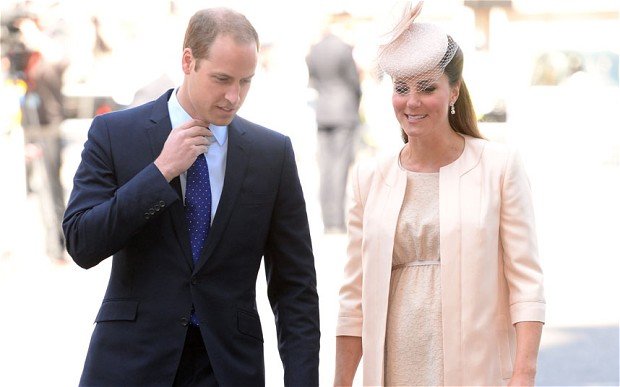 Royal babies tend to be given a number of middle names.

The Prince of Wales has four names – Charles Philip Arthur George – while the Duke of Cambridge also has four – William Arthur Philip Louis.

The Queen has three names – Elizabeth Alexandra Mary – while Diana, Princess of Wales, was Diana Frances.

King Edward VIII, who abdicated the throne, had seven names – Edward Albert Christian George Andrew Patrick David – but was always known to his family as David.

Queen Victoria was named Alexandrina Victoria and as a child was nicknamed Drina.

According to the monarchy’s official website: “For the most part, members of the Royal Family who are entitled to the style and dignity of HRH Prince or Princess do not need a surname, but if at any time any of them do need a surname (such as upon marriage), that surname is Mountbatten-Windsor.”

In 1917, George V adopted Windsor as the royal family’s House and surname.

In 1960, for the direct descendants of the Queen and the Duke of Edinburgh who require a surname, it became Mountbatten-Windsor.

Mountbatten was the surname Greek-born Prince Philip assumed when he became naturalized in 1947.

If a boy, the baby is also likely to one day be Prince of Wales when William accedes to the throne. The title is usually given to the male heir to the throne, but it is not automatic.

Bookies are already cashing in after due dates backed by the punters passed by without a baby.

The most popular day for due-date bets was last Thursday, July 18, when 1,142 people lost money with Ladbrokes alone.

William Hill said it had already taken £100,000 ($150,000) in due date bets but could not say how many people had lost out as all bets remain open until the baby is born.

The bookmaker has now stopped taking bets on when the baby will arrive, and said the majority of people had bet on it being today.  Meanwhile there has also been a surge in bets for an August due date – money they are now likely to lose.

Bookies are also taking bets on everything from the baby’s star sign to its hair color, and whether Prince William or Kate Middleton will be holding it when they first emerge from hospital.

A baby girl is favorite, with odds of 1-2, while the odds on it being a boy are 6-4, Coral said today.  The bookmaker said the baby’s birth has been the biggest non-sporting event in the company’s history.

If the baby comes before 4.54 p.m. today it will be a Cancer star sign, and if it comes after that it will be Leo, as Kate Middleton’ mother has predicted.

TOP TEN NAMES IF THE ROYAL BABY IS A GIRL:

TOP TEN NAMES IF THE ROYAL BABY IS A BOY: