Pope Francis has arrived in Rio de Janeiro on his first trip abroad since becoming head of the Catholic Church in March.

The first Latin American Pope touched down at Rio de Janeiro airport on Monday afternoon and was greeted by Brazil’s President Dilma Rousseff.

The Argentina-born pontiff has travelled to Brazil to attend the Roman Catholic World Youth Day festival. 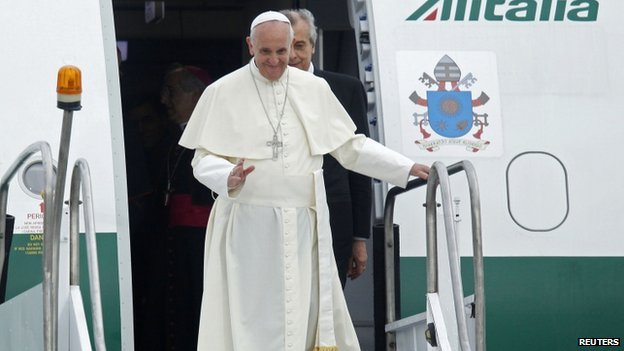 As he left the Alitalia plane, Pope Francis was welcomed by President Dilma Rousseff to cheers and applause from the waiting crowd. A choir sang and the pontiff was presented with a bouquet of flowers.

Pope Francis waved before being taken by motorcade to the centre of Rio de Janeiro, where large numbers of pilgrims have gathered.

The authorities have increased security during the Pope’s visit, following weeks of nationwide protests against corruption and bad governance.

Pope Francis has refused to use an armored Popemobile, despite requests from Brazilian officials. Some 22,000 security staff will be on duty during his visit.

Pope Francis is due to lead a service on Copacabana beach, and visit a shanty town.

Speaking to reporters on his flight from Rome, Pope Francis said: “We run the risk of having a generation that hasn’t worked,” even though work confers dignity.

Pope Francis also criticized what he said was a “culture” of socially rejecting the elderly who were “thrown away” as if they had nothing to offer.