Crowds of youths in the Paris suburb of Trappes have thrown stones at police officers and set fire to cars in a second night of disturbances.

The trouble was sparked by the arrest of a man whose wife was told by police on Thursday to remove an Islamic face-covering veil, banned in public. 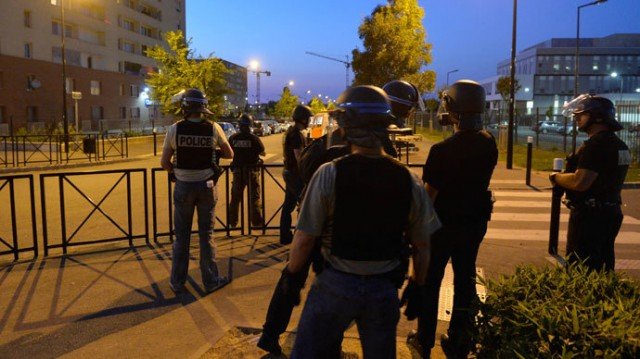 Trappes unrest was sparked by the arrest of a man whose wife was told by police to remove an Islamic face-covering veil, banned in public

He has been accused of trying to strangle the officer.

Up to 300 people attacked a police station in Trappes on Friday night where the man was being held.

The suspect, described as a Muslim convert aged 21, was later released on Saturday pending an appearance in court, French media say.

The ban on wearing the full face veil in public was introduced in April 2011 with the threat of a financial penalty for not observing it.

Reinforcements from the CRS riot police were drafted in and Interior Minister Manuel Valls said they would remain in place until calm was restored. Thirty riot police vehicles were seen outside the Trappes police station.

In the latest violence which erupted in Trappes and several neighboring areas, bus-shelters and cars were torched and fireworks directed at police, who responded with tear gas and baton charges.

The worst of the trouble took place in the early hours of Sunday. In one reported incident, a car was driven at police but no-one was hurt.

Four people were arrested and 20 cars burned, Manuel Valls said in a statement.

Although there has been no sustained unrest since the 2005 riots, sporadic violence is far from rare, he adds.

In 2005, a state of emergency was imposed when a wave of rioting spread across France, sparked by the deaths of two teenagers in a Paris suburb.