The trailblazing journalist covered the administrations of 10 presidents and was known for asking difficult questions.

Helen Thomas was a fixture at White House news conferences and considered a pioneer for women in journalism.

Starting out in journalism as a copy girl in a small Washington newspaper, Helen Thomas joined the White House press corps in 1961 and worked there for United Press International and Hearst newspapers until her retirement in 2010.

From her seat in the middle of the front row of the briefing room, Helen Thomas would grill presidents and exasperate government spokespeople with her pointed, persistent questions.

One White House press secretary described Helen Thomas’ questioning as “torture” – and he was one of her fans, the Associated Press reports. 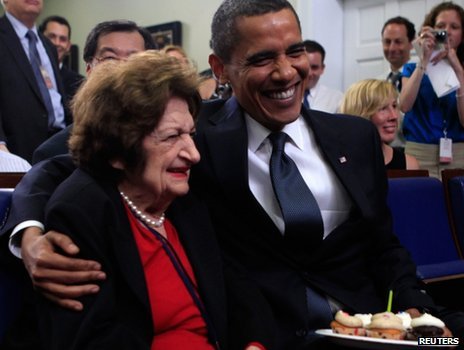 She was a pioneer for women in journalism, notching up a series of first during her career.

Helen Thomas became the first female president of the White House Correspondents Association (WHCA), the first female member of the Gridiron Club and the only female print journalist to travel with President Richard Nixon on his first trip to China.

Her career ended under a cloud in 2010 after she said in an interview that Israeli Jews should “get the hell out of Palestine” and “go home” to Germany, Poland and America.

Helen Thomas later said she deeply regretted the comments, saying “they do not reflect my heartfelt belief that peace will come to the Middle East only when all parties recognize the need for mutual respect and tolerance”.