President Vladimir Putin lashed out at critics of Russia’s crushing victory in the Universiade world student games, mischievously suggesting they would be better off enjoying life by taking Viagra.

The Russian team won six times more gold medals than any other nation at the biennial Universiade world student games that wrapped up Wednesday in Russia’s Volga city of Kazan. 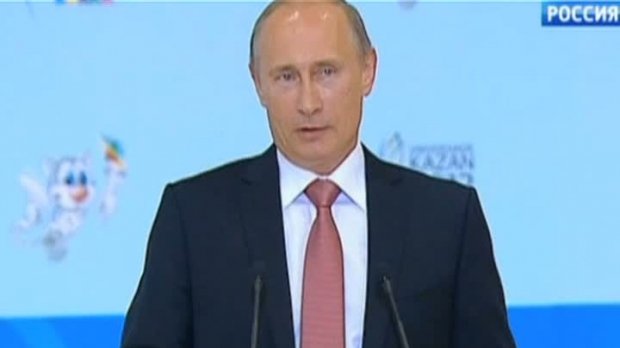 Vladimir Putin lashed out at critics of Russia’s crushing victory in the Universiade world student games, mischievously suggesting they would be better off enjoying life by taking Viagra

Several editorials in Russia’s sports and opposition media have however ridiculed the achievement, saying the medal haul was made possible by fielding elite professional athletes in the amateur competition.

“When we have such great victories, people start lamenting that something is not right,” Vladimir Putin told the medal winners at a reception outside Moscow.

“I’d like to advise them to play sport – and if they have health problems then go to the doctor… Maybe taking Viagra would help. And life would work out. See its most beautiful side.”

Vladimir Putin’s reference to Pfizer’s iconic drug was characteristic of his frequent use of earthy language to mock critics.

Russia won an astonishing 155 gold medals at the 27th Universiade, with a team packed with Olympic champions and elite athletes.

It even won both the men’s and women’s competitions in rugby, not a sport where it is a known world beater.

No other nation could even touch Russia’s dominance, with China coming second in the gold medal tally with 26 golds and Japan third with 24.

Russia’s political leaders are keen to show the nation has retained its Soviet-era sporting dominance ahead of the Winter Olympics in the southern Russian resort of Sochi in 2014, despite a series of let-downs in recent years.