Ireland Baldwin posted some pictures showing how her boyfriend Slater Trout has been welcomed with open arms by her famous family.

Ireland Baldwin, 17, had a blast leaping off a boat as part of a family vacation in The Hamptons with father Alec Baldwin and her boyfriend Slater Trout.

She proved she was no fish out of water as she shared a tweet of herself airborne while wearing a blue strapless bikini top decorated with fringe and red bikini bottoms.

Ireland Baldwin posted the picture on her Twitter page on Thursday along with the simple caption: “My boys.” 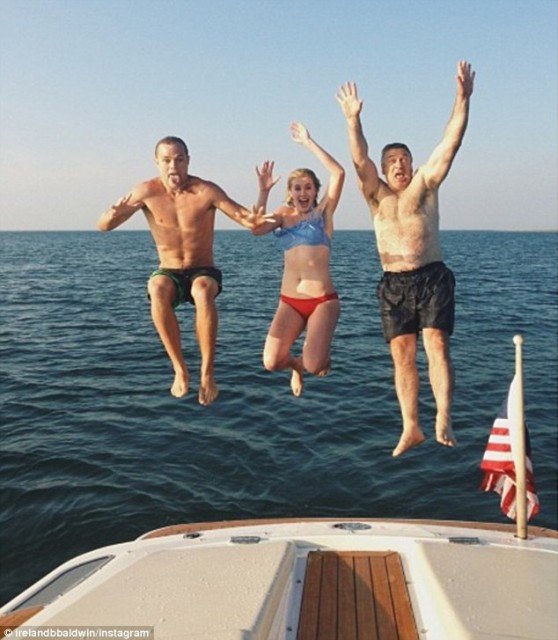 She reached up into the air with her arms and her legs curled beneath her in anticipation of water contact.

On her right her bare-chested paddleboarder boyfriend was shown sticking out his tongue.

And on her left father Alec Baldwin, wearing black swimming trunks, put on a look of feigned shock.

Ireland Baldwin has previously spoken of how her father “approves” of her choice of boyfriend.

Earlier in the day Ireland was in a more relaxed mood as she shared a glamorous photo of herself posing with Alec Baldwin’s pregnant wife Hilaria Thomas.

“Our boat face,” Kim Basinger’s gorgeous daughter tweeted along with the photo.

Ireland Baldwin lives with her mother Kim Basinger in Los Angeles, but frequently makes room for visits with her father on the East Coast.