The eldest Robertson child is also the newest to the family, Rebecca. Rebecca came to the Robertsons as an exchange student from Taiwan, but then became their foster daughter. 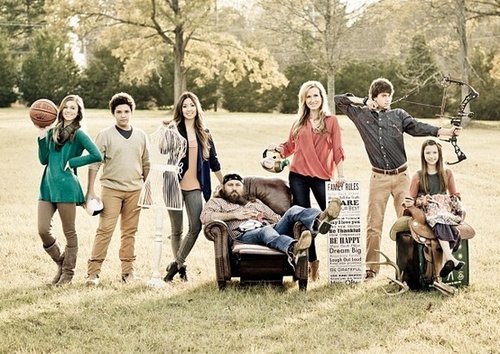 Willie and Korie Robertson with their five kids, Sadie, Will, Rebecca, John Luke and Bella

John Luke is the eldest boy and the one who has been on Duck Dynasty most often.  We’ve seen John Luke on a date (chaperoned by grandfather, Phil Robertson), playing video games with cousin Cole, and generally hanging around the house during filming.

Sadie’s been right in the middle of Duck Dynasty, too.  We’ve seen her cook with her grandmother, Miss Kay, and climb under the house for her granddad, Phil.  But, getting driving lessons from Uncle Si provided her most memorable screen time.

Will was the third Robertson child to join the family, adopted at birth before Bella was born and before Rebecca joined the family.  Will shows up on camera now and then, but we haven’t heard much from him yet.

And then there’s the youngest, Bella. Let’s hope we get a chance to get to know her on the show, too.