Trayvon Martin’s parents, Sybrina Fulton and Tracy Martin, said they are shocked and disgusted the jury in George Zimmerman’s trial found him not guilty of murdering their son.

George Zimmerman, 29, was acquitted of both second-degree murder and manslaughter on Saturday night after a month-long trial that gripped and divided the nation.

Trayvon Martin’s parents, who both testified their son was screaming for help on a 911 call that was a crucial piece of evidence in the trial, made a string of TV appearances this morning to talk about the verdict.

“I really didn’t believe that he was not guilty. My first thought was shock, disgust. I think people are forgetting that Trayvon was a teenager so he probably thought as a teenager,” Sybrina Fulton told Good Morning America.

“I really do believe he was afraid because he did call George Zimmerman creepy. So he was afraid and if you are 17 years old and you are afraid, you may not know what to do.”

Tracy Martin said: “I wish they really knew Trayvon for who he was and knew that he was a kid. They didn’t know him as a human being, a very decent human being, a fun-loving kid. He loved kids.

“I just wish they had an opportunity to really know who Trayvon was and to put that in context with what their decision was.”

George Zimmerman’s parents, Robert and Gladys, spoke to Barbara Walters this week and said that if they had the chance, they would tell the couple they are truly sorry about what happened the night their son fatally shot 17-year-old Trayvon Martin.

When asked whether he was comforted by this, Tracy Martin called it a “hard and fair question”.

“There’s no winner in this situation,” he said. 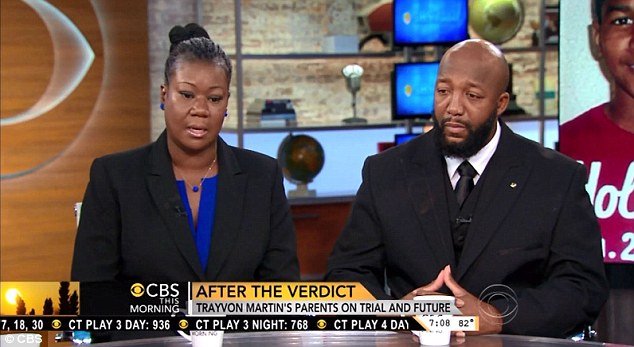 Trayvon Martin’s parents, Sybrina Fulton and Tracy Martin, said they are shocked and disgusted the jury in George Zimmerman’s trial found him not guilty of murdering their son

“Obviously, we are devastated more.

“I just think that all the circumstances surrounding books being written and the mischaracterization of us as parents, I just really don’t feel that it’s real sincere.

“But we continue to pray that we’ll find peace and strength to be forgiving parents.”

Tracy Martin and Sybrina Fulton have started a foundation named after their son and say they hope his death and the trial can serve as a catalyst to bring the country together.

“We need to start learning each other, understanding each other. You can’t just judge a book by its cover. Something is wrong in so many ways to say that someone is suspicious just because you don’t know them.”

Sybrina Fulton added: “It’s not just about the Trayvon Martin case. Now it’s about your kids. It’s about other kids. What do we tell our sons?”

Today was the first day the two had spoken out about the verdict on TV.

They also appeared on the Today show where they told Matt Lauer they are still in disbelief over the verdict.

“Is this the intent for the justice system to have for victims. Trayvon wasn’t doing anything wrong,” Tracy Martin said.

“We felt in our hearts that we were going to get a conviction. We thought that the killer of our unarmed child was going to be convicted of the crime that he committed.”

When asked if they would like to say anything to the jury, he responded: “How can you let the killer of an unarmed child go free?

“What would your verdict have been had it been your child? And there’s no winner in this case at all. It’s just, I want them to put themselves in our shoes.

“Obviously anytime you have a person that makes an assumption that a person is up to no good, there’s some type of profiling there. Was he racially profiled?

“I think that if Trayvon had been white this wouldn’t have never happened. Obviously race is playing some type of role.”

Sybrina Fulton said she felt the jurors and the justice system failed her son “to a degree”.

“We let the process take its course. We didn’t get the verdict that we were looking for because we wanted [George Zimmerman] to be held accountable.

“Our focus has continued to change. First it was for an arrest then it was for a conviction…we were disappointed.”

“I think that the forgiveness is like a healing process, forgiven takes time,” he said.

“The Bible says that you have to forgive and forget, but also the healing process is a long process.”