Russian activist Alexei Navalny has been jailed for five years, for embezzlement from a timber firm.

Protest leader Navalny, 37, had denied the charges, saying the trial was politically motivated.

He had been a leading campaigner against President Vladimir Putin’s United Russia party, and regularly blogged about corruption allegations.

The EU said the verdict posed “serious questions” about the state of Russian law. The US said it was “deeply disappointed”.

Before he was handcuffed and led away, Alexei  Navalny urged his supporters to continue his anti-corruption struggle, tweeting: “Don’t sit around doing nothing.”

He has previously said he would like to stand for president one day.

Alexei Navalny had recently registered his candidacy for the next mayor of Moscow, but his campaign team said that after the verdict he was withdrawing from the race, and called on his supporters to boycott the vote.

Anti-Putin activist and former cabinet minister Boris Nemtsov told reporters the trial was “completely fabricated from start to finish, and even the judge could not say what the reason for the crime was”.

Other countries have also voiced their concern at the verdict. The US ambassador to Moscow, Michael McFaul, said: “We are deeply disappointed in the conviction of Navalny and the apparent political motivations in this trial.” 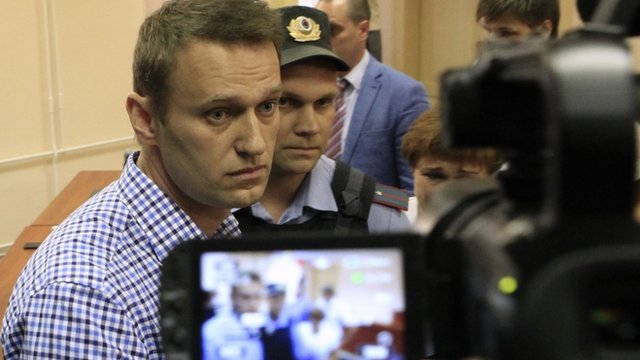 Alexei Navalny has been jailed for five years, for embezzlement from a timber firm.

A spokesperson for the EU’s top foreign policy official, Catherine Ashton, said the embezzlement charges were unsubstantiated, and that Alexei Navalny’s jailing posed “serious questions as to the state of the rule of law in Russia”.

French foreign ministry spokesman Philippe Lalliot added his concern, but said: “We note that not all judicial remedies have been exhausted and that the sentence could be reviewed on appeal.”

Alexei Navalny’s supporters in Moscow have vowed to stage protests against the verdict later on Thursday.

He arrived at the courtroom in Kirov to hear the verdict after a 12-hour overnight train journey from Moscow.

His wife, Yulia Navalnaya, said her husband knew he would get a non-suspended sentence and was mentally prepared to go to prison.

Alexei Navalny was found guilty of heading a group that embezzled timber worth 16 million rubles ($500,000) from the Kirovles state timber company while working as an adviser to Kirov’s governor Nikita Belykh.

The prosecution had asked for a six-year jail sentence, but judge Sergei Blinov decided on five years, and said there were no extenuating circumstances that would warrant keeping Alexei Navalny out of prison.

State television has only shown limited interest in the process despite Alexei Navalny’s prominence, but online the trial has been followed extensively.

Alexei Navalny came to public attention when he inspired mass protests against the Kremlin and President Vladimir Putin in December 2011.

Judge Sergei Blinov said he found the testimony of the main prosecution witness, Vyacheslav Opalev, to be “trustworthy and consistent”.

Alexei Navalny insists that Vyacheslav Opalev spoke against him out of revenge, because Navalny had recommended he be fired and his company investigated for corruption.

After the verdict, Alexei Navalny tweeted: “So that’s it. Don’t get bored without me. Most importantly, don’t sit around doing nothing. The toad won’t get off the oil pipe by itself.”

In his LiveJournal blog on Wednesday Alexei Navalny said: “The current authorities are not a big, healthy fish, but rather a bloated fish or Latin American toad, which puffs itself up when it sees danger, with the help of television.”

In an unusual step, the court allowed the whole trial to be broadcast live online.

He is now one of the key figures of the opposition – a thorn in the side of the political establishment, campaigning against the endemic corruption.

Alexei Navalny has also coined a phrase to describe the ruling party United Russia that has stuck in everyone’s minds – “the party of crooks and thieves”.