Renee Always appeared battered and bruised while her eyes look downward in despair.

The contrast couldn’t have been greated to the height of her fame.

Renee Alway’s eyes appear to be bruised with red marks underneath them while there are cuts and scratches around her face in the aftermath of her six hours armed standoff with police officers last month.

She was arrested on June 28 for investigation of burglary, fraud, narcotics possession, committing a felony while on bail and other charges, the Palm Springs Police Department said in a statement.

Officers responding to a report of a suspicious woman walking around a neighborhood spotted a condominium with an open back door, police said. 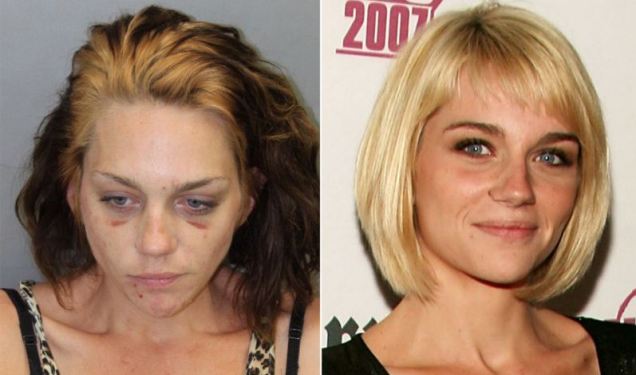 Neighbors told officers the residents were out of the country and Renee Alway was found hiding in the garage allegedly armed with a gun, police said.

Authorities believed an armed man also was in the condo and the SWAT team was called in for the ensuing six-hour standoff.

Renee Alway has remained in custody at the Larry D. Smith Correctional Facility in nearby Banning with bail set at $150,000.

She was scheduled to appear in court on Thursday for a drug court evaluation.

Renee Alway also was arrested on June 2 and charged with possession of drug paraphernalia, petty theft and fraud.

She pleaded not guilty and was released on bail, which prompted the charge of committing a felony while on bail following her latest arrest.

He did not give any specifics on her other alleged crimes.

Renee Alway competed on Cycle 8 of the modelling competition show created by and starring Tyra Banks and finished third.

Cycle 20 of America’s Next Top Model will premiere on August 2.