Four of the jurors in the George Zimmerman trial have banded together to separate themselves from juror B37 who helped acquit the neighborhood watchman for the killing of Trayvon Martin.

The group released a joint statement after juror B37 spoke to CNN about their closed-door sessions after the trial.

“The opinions of Juror B37, expressed on the Anderson Cooper show were her own, and not in any way representative of the jurors listed below,” they said in the statement released Tuesday night.

In an effort to maintain their privacy, the four women identified themselves only as B51, B76, E6 and E40. One juror, B29, did not sign the document.

“Serving on this jury has been a highly emotional and physically draining experience for each of us,” the statement read.

“The death of a teenager weighed heavily on our hearts but in the end we did what the law required us to do.”

Even though they stepped away from juror B37’s claims, all six of the women had to agree on the not guilty verdict before it was announced on Saturday night.

One of juror B37’s most controversial claims in the Anderson Cooper interview was that Trayvon Martin “played a huge role in his death”.

“When George confronted him he could have walked away and gone home,” the woman said in the second portion of her post-trial interview.

While she was apologetic to Trayvon Martin’s family, she seemed more sympathetic to George Zimmerman’s position in the midst of the fight, as opposed to Martin’s own self defense.

“I have no doubt that George feared for his life,” she said to CNN’s Anderson Cooper. 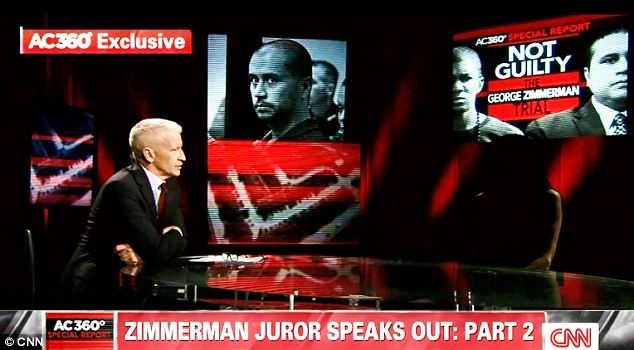 “I’m 101% that he should have done what he did except for the things that he did before,” she said, referencing George Zimmerman’s decision to follow Trayvon Martin in his car and, fatefully, get out of the car and confront him.

While George Zimmerman himself never took the stand in his own defense, video recordings of him explaining the situation to police after the fatal shooting were submitted, effectively giving him the chance to tell his side without leaving himself open to a cross examination.

That was no matter for the juror: “I’m sure there were some fabrications, enhancements, but I think pretty much it happened how he said it happened.”

Initially this unidentified female juror was planning on writing a book about her experience on the trial- and even had a literary agent lined up early Monday afternoon- but after the first portion of her interview was aired that evening she and the agent decided not to follow up.

The second portion of B37’s interview was aired on Tuesday, and she went into more detail about how two specific tact used by the prosecution may have influenced the outcome.

Throughout her interview with Anderson Cooper, the woman regularly referred to the neighborhood watchman as George, and though she did call the 17-year-old Trayvon, she admitted that she felt more personally connected to George Zimmerman as opposed to Trayvon Martin.

“Trayvon wasn’t as well known to us because there wasn’t as much said about him,” she said.

Anderson Cooper brought up the fact that the two legal teams took very different visual approaches when making their closing arguments, with the defense holding up a concrete block like a portion of the sidewalk to show what they contend Trayvon Martin used to attack. On the opposite end, the prosecution held up the Arizona Iced Tea bottle and a bag of Skittles, saying that was the only thing he was armed with.

“The Skittles and the Arizona can were ridiculous to even compare it to,” she said.

“I believe he hit his head on the concrete, I believe he was trying to slam it…it was definitely enough to make you fear.

“I hope [George Zimmerman’s] family can live a normal life after a while. I don’t know how he’s ever going to do that.”

Yesterday it was revealed that the first vote that the six-woman jury took behind closed doors came as a draw, with three wanting to acquit, one ready to charge him with second degree murder and two for manslaughter.

In today’s segment, she made it clear that after hours of discussing the case and the evidence, the group had shifted to be five in favor of acquittal with one hold out.

“I wanted to find him guilty of not using his senses…you can’t charge him with anything because he didn’t do anything unlawful,” she said.

Juror B37 went on to sob while saying that she wanted to apologize to the Martin family for the tragedy that they had to go through, but she also had a message for George Zimmerman and his family- after it was revealed yesterday that his parents have been in hiding as well as the former neighborhood watchman and his wife.

“I hope his family can live a normal life after a while. I don’t know how he ever going to do that. He’ll never forget but I hope he can,” she said.

Juror B37’s interview aired just minutes before four of the remaining five jurors put out a statement saying that they want to remain anonymous and are formally requesting privacy.