Kanye West’s A.P.C. menswear collection sold out within a matter of hours after it went on sale on the brand’s website – and the heavy stream of traffic even caused the site to crash.

The collaboration – which features T-shirts, sweatshirts and jeans priced between $120 and $280 – was available for pre-order, and it is not known when a second drop of products will be expected.

“When we finally finished this collection, I felt like, Okay, if I made this happen, then I can achieve peace in the Middle East.” 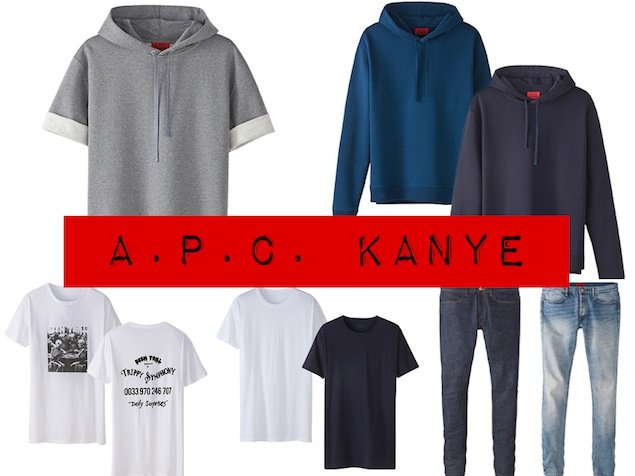 Kanye West’s A.P.C. menswear collection sold out within a matter of hours after it went on sale on the brand’s website

Jean Touitou said the resulting jeans, T-shirt and hoodie are “precious” pieces to both he and Kanye West “because it took time and thoughts to get there”.

He admitted to GQ that he had no idea who Kanye West was when they first met more than two years ago.

“A visitor to the A.P.C. studio was announced to me as <<Kenny>>. He wanted my advice on the fashion industry. . . He had nice manners and spoke about losing his mother in a surgery accident, about losing his girlfriend too, and about how difficult doing the right thing in fashion was.

“After a while, I was curious to know what this gentleman was currently doing in his life. I simply asked him: <<May I know what your trade is, sir?>> He took his shades down, so that finally I could see his eyes, and answered me: <<I am a hip hop artist>>.”

The collaboration between Kanye West and Jean Touitou was announced on last weekend via the APC Instagram feed, with an image of blue jeans featuring a red label bearing the words “A.P.C. KANYE”.

According to People magazine, APC has restocked some items and is accepting pre-orders for other sold-out items.

The A.P.C. collaboration follows the launch of Kanye West’s high-end womenswear line, which was widely panned by critics when it launched in 2011.

Kanye West, 36, who moved to Rome to work as an intern for Fendi as part of his research, was accused of “lack[ing in] creative marksmanship” and his efforts a “stupendously vacuous enterprise”.

His follow-up collections have since received a warmer reception, though Kanye West believes that the press has it the wrong way around.

“The first collection was way better than the second,” he said.

“It was more artful. It was 30 collections in one. It just takes time for me to slow down and think like a normal person.”