The niece of Julia Roberts was taken into custody on July 7 in Montreal, Canada, after getting into a fight with her beau that left Evan Peters bloody, according to TMZ.

Police were called after someone reported a fight in the couple’s hotel room and found Evan Peters, 26, with a bloody nose.

Emma Roberts, 22, was released hours after her arrest because Evan Peters declined to press charges, according to TMZ‘s report. 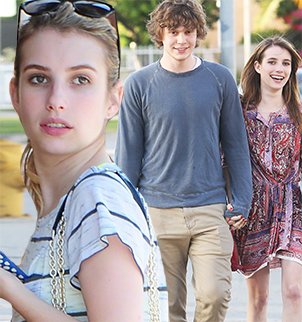 Evan Peters and Emma Roberts were said to be hitting each other and she was arrested because he had obvious physical injuries, a source told the website.

A law enforcement source said Evan Peters also had a bite mark, but a source close to Emma Roberts denied the actress bit him.

Emma Roberts and Evan Peters are now reportedly back together and are working on Peters’ hit show American Horror Story.

The pair met last year on the set of Adult World and have been spotted in public displays of affection since becoming a couple.

Evan Peters has called Emma Roberts “the love of my life” and stars in FX’s hit horror show while his girlfriend has a recurring role.

Emma Roberts is the daughter of Eric Roberts, an actor best known for his work in 1985’s Runaway Train and his troubles with drug abuse.