Home World U.S. News Juror B37 opens up to Anderson Cooper on George Zimmerman not guilty...

Juror B37 in the George Zimmerman trial has revealed that at no point did the largely-white all-female jury consider the motivation behind the killing of Trayvon Martin.

The woman, identified only as Juror B37, said that they believed that it was a “tragedy” that came from George Zimmerman going too far but said that the former neighborhood watchman’s “heart is in the right place”.

Juror B37 told CNN’s Anderson Cooper that George Zimmerman made some poor decisions leading up to the shooting, but that Trayvon Martin wasn’t innocent either.

“I think both were responsible for the situation they had gotten themselves into,” said the juror, who was planning to write a book about the trial.

“I think they both could have walked away.”

The woman also said that she felt it was clear that the 17-year-old threw the first punch: “Trayvon decided that he wasn’t going to let (George Zimmerman) scare him… and I think Trayvon got mad and attacked him.”

When asked by Anderson Cooper if she would feel comfortable having George Zimmerman patrolling her neighborhood, she said that while Trayvon Martin’s death was tragic, it would serve as a learning experience.

“I would feel comfortable having George, but I think he learned a lesson,” she said, hesitating slightly.

“I think he’d be more responsible than anyone else on this planet right now.”

Hours after the interview with Anderson Cooper aired, the literary agent who agreed to represent the juror announced that she withdrew her services.

“After careful consideration of the book project with Zimmerman #JurorB37, I have decided to rescind my offer of representation,” agent Sharlene Martin said via Twitter.

Sharlene Martin also put out a statement from the juror herself, who said: “This potential book was always intended to be a respectful observation of the trial from my and my husband’s perspectives.”

“Now that I am returned to my family and to society in general, I have realized that the best direction for me to go is away from writing any sort of book and return instead to my life as it was before I was called to sit on this jury.”

In the CNN interview, Juror B37 said Sanford Police Detective Chris Serino made a big impression on her, because he would have been accustomed to dealing with murders and similar cases.

He would have known how to spot a liar, and yet he testified that he believed George Zimmerman, the juror said.

Legal analysts agreed that Chris Serino’s testimony was a blow to the state’s case.

The juror was not impressed by the testimony of Rachel Jeantel, who was talking with Trayvon Martin by cellphone moments before he was fatally shot by George Zimmerman in February, 2012.

“I didn’t think it was very credible, but I felt very sorry for her,” the juror said.

“She didn’t want to be there.”

The juror also commented on defense attorney Don West’s knock-knock joke about knowing who George Zimmerman was during opening statements.

“The joke was horrible. Nobody got it,” she said.

The interview came two days after the six-woman jury acquitted George Zimmerman, a former neighborhood watch activist, of second-degree murder in the shooting death of black teenager Trayvon Martin in a gated community in Sanford, Florida.

Trayvon Martin was black, and George Zimmerman identifies himself as Hispanic.

George Zimmerman was not arrested for 44 days, and the delay in charging him led to protests from those who believed race was a factor in the handling of the case. 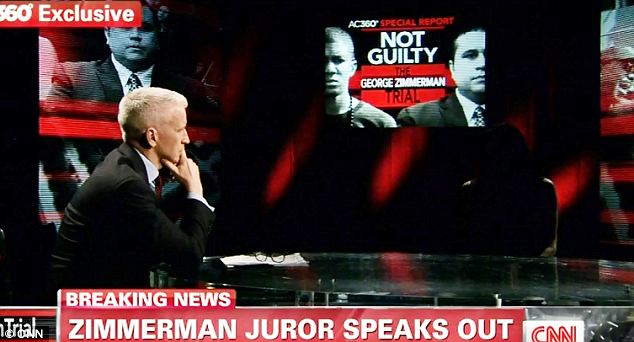 “I have no doubt George feared for his life in the situation he was in at the time,” the juror said.

Juror B37 also outlined to CNN the process she and the other five jurors went through in their deliberations.

She said they spent the first day electing a foreman and getting organized. She said the jury instructions weren’t immediately clear and the evidence was in no order whatsoever.

George Zimmerman was charged with second-degree murder, but the jury also was allowed to consider manslaughter.

Based on an initial vote, three – including B37 – were in favor of acquittal, two wanted manslaughter and one wanted second-degree murder.

Juror B37 said the jury started going through all the evidence, listening to tapes multiple times.

When they started looking at the law, the person who initially wanted second-degree murder changed her vote to manslaughter, the juror said.

Then they asked for clarification from the judge and kept going over it again and again. B37 said some jurors wanted to find George Zimmerman guilty of something, but there was just no place to go based on the law.

B37 said jurors cried when they gave their final vote to the bailiff.

“I want people to know that we put everything into everything to get this verdict,” said the juror, who appeared to become emotional during the interview.

“We thought about it for hours and cried over it afterwards,” she said.

“I don’t think any of us could ever do anything like that ever again.”

Martin Literary Management announced Monday that it is representing B37 and her husband, who is an attorney.

The names of the jurors have not been released, but during jury selection it was disclosed that B37 works in an unspecified management position and has two adult children.

In a statement initially released Monday morning, Martin Literary said the book would focus on what it is like to be sequestered and why B37 felt she had no choice but to acquit George Zimmerman. The agency said it is approaching several publishers.

In a separate interview, Rachel Jeantel was asked by CNN’s Piers Morgan whether she thought race was a factor in George Zimmerman’s decision to follow Trayvon Martin prior to their fight.

“Let’s be honest. Racial. If he were white, if Trayvon was white and he had a hoodie on, what would happen?”

She noted that the altercation happened in the early evening, when many people are out walking their dogs or doing other things.

Piers Morgan played back a recording of the juror’s comments about Rachel Jeantel’s education level and speech, and the witness said it made her sad and angry.

Rachel Jeantel, who is black, said she also had a feeling that the jury would return a not-guilty verdict.

“They’re white,” she said of the jury at one point.

“Well, one Hispanic. But she’s stuck in the middle. I had a feeling it was going to be a <<not guilty>>.”

While the court did not release the racial makeup of the jury, the panel appeared to reporters covering jury selection to be made up of five white women and a sixth who may be Hispanic.

In previous reports, B-37 has been identified as a white woman who volunteers at an animal shelter and who is married to an attorney with two adult children.

During her voir dire – in which attorneys question would-be jurors to determine if they are suitable to take part in a case – reveals that she called Trayvon Martin “a boy of color” when asked to describe him.

She added that his killing was “an unfortunate incident that happened” and said she believed there were riots in Sanford, Florida after the killing – which is not the case.

She was also vocal about her hate of the media – saying she refused to read newspapers as they were skewed.

“My hope is that people will read Juror B37’s book, written with her attorney husband, and understand the commitment it takes to serve and be sequestered on a jury in a highly publicized murder trial and how important, despite one’s personal viewpoints, it is to follow the letter of the law,” she said.

She added that the book has the potential to open discussions about how laws might need to be revised in order to fit with modern society.

“The reader will also learn why the jurors had no option but to find Zimmerman Not Guilty due to the manner in which he was charged,” she said.

The juror is choosing to remain anonymous and it is unknown if they will conduct interviews as the project proceeds due to the reaction to the verdict.

Sharlene Martin has represented books written by high-profile writers, including Honor Bound by Raffaele Sollecito and Picture Perfect: The Jodi Arias Story by Shanna Hogan, due out in September.

Mystery still surrounds the identities of the jury members and there is still no indication of how long the six women, known only to the public as B76, B37, E6, B29, E40 and B51, will remain anonymous.

Jurors refused to talk to reporters about how they reached their decision on Saturday after they received numerous interview requests from media outlets.

Their names are being kept secret until Judge Debra Nelson lifts an order protecting their identities.

Attorneys have argued that the names should not be kept secret.

In June, the judge ruled they would remain anonymous for an unspecified period after the verdict and George Zimmerman lawyer Mark O’Mara argued they should be kept secret for six months after the trial.

Speculation also surrounds whether or not George Zimmerman himself will pen a book revealing his experiences. The AP suggested he could make money from the project or from a lawsuit he brought against NBC last year after it allegedly edited his 911 tapes to make him look like a racial profiler.

Following his acquittal on all charges, George Zimmerman will spend no time behind bars.

But the Department of Justice could file criminal civil rights charges, and George Zimmerman may face civil lawsuits from the family of Trayvon Martin, who was unarmed at the time of his death last year.

The verdict has sparked uproar across the U.S., with Trayvon Martin supporters claiming that the killing was racially motivated as they stage massive protests across cities from New York to Los Angeles.