Seven Egyptian protesters have been killed in Cairo in overnight clashes between security forces and supporters of ousted President Mohamed Morsi.

Police used tear gas to drive back protesters, some hurling rocks, who had blocked a main route in the capital.

The clashes came as senior US envoy William Burns visited Egypt, saying it had been given a “second chance” at democracy.

Mohamed Morsi was ousted on July 3 in what many have said was a military coup. The army says it was fulfilling the demands of the people after mass anti-Morsi protests.

Monday’s battles erupted after hundreds of protesters, mostly members of Mohamed Morsi’s Muslim Brotherhood Islamist movement, blocked the Sixth of October bridge, a major route over the Nile and through the capital, and the nearby Ramses Square, a transport hub.

State media quoted health ministry official Khaled al-Khatib as saying 261 people were injured in the clashes, which lasted into the early hours of Tuesday.

Members of the Brotherhood said security forces had used live ammunition, and accused them of attacking a peaceful protest. 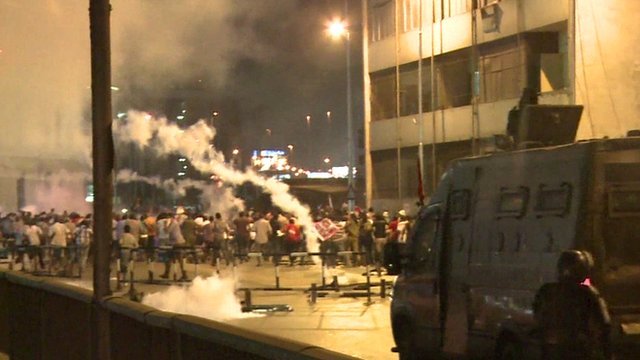 “We were praying. Suddenly there was shouting. We looked up and the police were on the bridge firing tear gas down on us,” protester Adel Asman told Reuters news agency.

The latest clashes are the most violent since last week, when more than 50 Morsi supporters were killed in fighting with troops outside the Republican Guard compound, where they believe the former president is being held.

The interim government has since announced its transition plan. A panel is to be formed by next week to draw up amendments to the constitution and a timetable for new elections.

But the Brotherhood has said it will not join a transitional government.

Mohamed Morsi supporters are demanding his reinstatement and have been holding a round-the-clock vigil outside the Rabaa al-Adawiya mosque, in the east of the capital, and at Cairo University in Giza.

Large crowds were again gathered at the mosque on Monday as William Burns, the US deputy secretary of state, visited.

“Get out, Sisi,” some shouted, referring to the head of the armed forces, General Abdel Fattah al-Sisi, who oversaw the overthrow of Mohamed Morsi.

He described the events of the last two weeks as a “second chance to realize the promise of the revolution” that ended the authoritarian presidency of Hosni Mubarak in 2011.

William Burns called on the military to avoid “politically motivated arrests”, saying the US remained committed to an Egypt that was “stable, democratic, inclusive and tolerant”.

But he insisted the US had “not come to lecture anyone. We will not try to impose our model on Egypt.”

The envoy’s comments come amid what correspondents say is an increasing antipathy towards the US among Egyptians on both sides of the political divide.

The US has stopped short of calling the army intervention a coup – doing so would trigger a legal stop of the some $1.5 billion in the mostly military aid it sends to the country each year.

But it has called for Mohamed Morsi to be released. He is being held at an undisclosed location and is being investigated on charges including inciting violence. A number of Brotherhood members have been arrested and warrants have been issued for many more.

William Burns said he planned to meet religious and civilian leaders, the heads of political parties and business figures during his two-day visit.

But both the ultra-conservative Salafi al-Nour party and the Tamarod anti-Morsi protest movement turned down invitations to meet William Burns, while the Muslim Brotherhood also said it had no plans to see him.

“Such kind of visit doesn’t mean anything for us because we believe that America supported this military coup,” said Dina Zakaria, a member of the Brotherhood and its political wing the Freedom and Justice Party.

Islam Hammam, a Tamarod organizer, said the movement had turned down the invitation to talks with William Burns “because the United States did not stand with the Egyptian people from the beginning.”