Lawyers for George Zimmerman, 29, argued he acted in self-defense and with justifiable use of deadly force in the death of 17-year-old Trayvon Martin.

The jury retired on Friday to consider its verdict on charges of either second-degree murder or manslaughter.

The case sparked a fierce debate about racial profiling in the US.

Protesters are gathering in Sanford, the Florida town where the shooting took place.

Police and community leaders have appealed for calm.

After the verdict, Judge Deborah Nelson told George Zimmerman he was free to go.

“Your bond will be released. Your GPS monitor will be cut off when you exit the courtroom over here. And you have no further business with the court,” Judge Nelson said.

George Zimmerman showed little reaction as the verdict was read out.

“Hopefully everyone will respect the jury’s verdict,” his lawyer Mark O’Mara told reporters after the case.

Mark O’Mara said George Zimmerman would now have to be “very cautious and protective of his safety because there is still a fringe element who have said that they would revenge – that they would not listen to – a verdict of not guilty.” 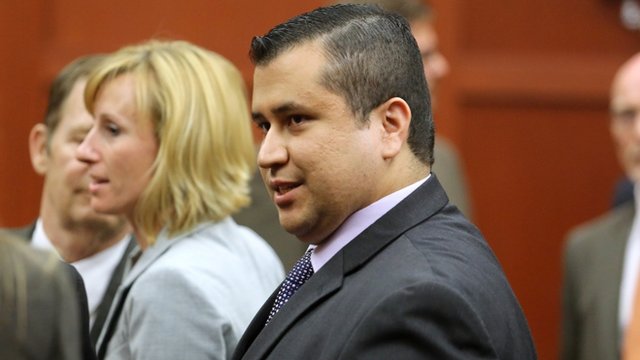 Another member of his defense team, Don West, said: “I’m thrilled that this jury kept this tragedy from becoming a travesty.”

The case brought into sharp relief some of the most divisive issues in the United States: race, gun control and equal justice under the law.

Florida police did not arrest George Zimmerman for six weeks after the shooting, provoking mass rallies in Florida and throughout the US.

Under the state’s controversial “stand your ground” law, the use of lethal force is allowed if a person feels seriously under threat.

Benjamin Crump, the Martin family lawyer, said: “Trayvon Martin will forever remain in the annals of history… as a symbol for the fight for equal justice for all.”

He, too, appealed for calm, saying “for Trayvon to rest in peace, we must all be peaceful”.

The family’s legal team said they were not in the courtroom when the verdict was read out.

State Attorney Angela Corey said she believed prosecutors had “brought out the truth on behalf of Trayvon Martin”.

“This case has never been about race or the right to bear arms,” she said.

“We believe this case all along was about boundaries, and George Zimmerman exceeded those boundaries.”

As the jury retired on Friday, the judge told the panel of six women to consider whether George Zimmerman acted in self-defense and with justifiable use of deadly force.

Without explicitly discussing race, the prosecution had suggested George Zimmerman assumed the African-American teenager, who was wearing a hooded sweatshirt as he walked in the rain, was up to no good.

But the defense said Trayvon Martin punched their client, slammed his head into the pavement and reached for George Zimmerman’s gun.

The accused, who was legally armed with a pistol, had been sitting in his vehicle on a dark street when he saw Trayvon Martin.

George Zimmerman telephoned police to report a suspicious person, then left his vehicle in apparent pursuit of the teenager.

But prosecutors said the accused had told a series of lies.

He said the “tragedy” of an unarmed black teenager shot dead in Florida should prompt some national soul-searching.

“If I had a son, he would look like Trayvon,” President Obama told reporters at the White House.

Following the verdict, the National Association for the Advancement of Colored People (NAACP) – best known for its battles against segregation and discrimination – said it was calling “immediately for the Justice Department to conduct an investigation into the civil rights violations committed against Trayvon Martin”.

“This case has re-energized the movement to end racial profiling in the United States,” Roslyn M. Brock, chairwoman of the NAACP, said in a statement.