Public prosecutor in Egypt has frozen the assets of 14 Islamist leaders, according to judicial sources.

The Muslim Brotherhood head Mohammed Badie and his deputy Khairat al-Shater are reported to be among them.

Mohammed Badie and other Muslim Brotherhood figures are already the subject of arrest warrants, while the ousted President Mohamed Morsi remains in custody.

On Sunday, army chief Abdel Fattah al-Sisi defended the decision to remove him from power.

In a speech, he said he had urged the Islamist president to hold a referendum on his rule days before he was overthrown.

“The response was total rejection,” he added.

Gen Abdel Fattah al-Sisi said no group would be barred from politics: “Every political force… must realize that an opportunity is available for everyone in political life and no ideological movement is prevented from participating.” 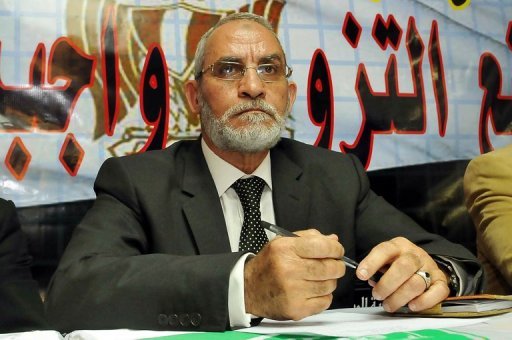 A temporary government is tasked with leading the country under an army-backed “road map” to restore civilian rule.

The decision by Egypt’s public prosecutor Hisham Barakat to freeze the assets of senior Islamists comes amid an ongoing investigation into deadly clashes that have happened since President Mohamed Morsi was ousted.

Dozens of people have died during major demonstrations by pro- and anti-Morsi protesters in the past two weeks.

According to Egypt’s state-run Channel 1 TV, the leader of the Brotherhood’s Freedom and Justice Party Mohammed Saad al-Katani has also been affected by the asset freeze, along with senior figures in rival Islamist groups.

Ahmed Galal, a liberal economist with a doctorate from Boston University, is to be finance minister. Nabil Fahmy, a former ambassador to the US, was named foreign minister.

Mohamed Morsi’s supporters, many of them members of the Muslim Brotherhood, have been staging a mass sit-in Cairo since their man was removed from power on July 3.

They are demanding his reinstatement as president and say the military’s removal of him amounted to a coup.

The army says it intervened to remove Mohamed Morsi in response to protests by millions of Egyptians who accused him of becoming increasingly authoritarian and failing to tackle economic difficulties.