France is preparing to celebrate its national day – known as Bastille Day – as investigations continue into the country’s worst rail disaster for 25 years.

Six people were killed when a train derailed at Bretigny-sur-Orge, south of Paris, at 17:14 on Friday.

The French train operator SNCF says the crash may have been caused by a fault on the tracks.

President Francois Hollande is expected to call for solidarity in a traditional Bastille Day broadcast on Sunday.

Francois Hollande will give a series of television interviews as workers continue to inspect the wreckage.

A large crane arrived at the site on Saturday evening to lift away the remains of carriages, and to find out whether there are still bodies lying beneath.

French media are reporting that it could still take a number of days to clear the derailed cars.

Transport routes were particularly busy at the time of the crash, as France began a long weekend for Bastille Day.

The July 14 celebrations, marking the start of the French Revolution in 1789, traditionally include an annual military parade on the Champs Elysees in Paris. 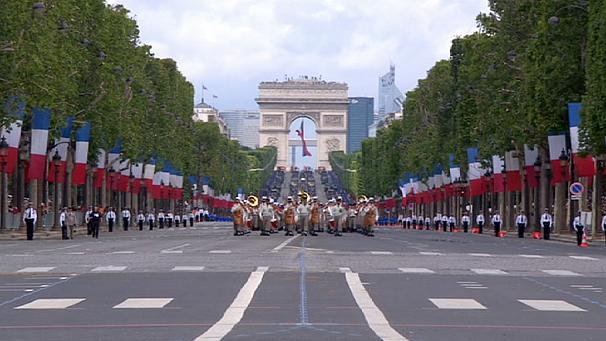 The July 14 celebrations, marking the start of the French Revolution in 1789, traditionally include an annual military parade on the Champs Elysees in Paris

A minute’s silence was held across France’s train network at noon on Saturday to commemorate the victims of the accident.

The train had just left Paris on Friday afternoon and was heading for Limoges when six carriages derailed as the train passed through Bretigny-sur-Orge station at 85mph.

The train’s third and fourth carriages derailed first and the others followed. One mounted the station platform.

Eye witnesses described the train flying into the air and flipping over. Some said it was like scenes from a “war zone” with people running and screaming.

“It moved into the centre of the switch and in this position it prevented the normal passage of the train’s wheels and it may have caused the derailment,” said Pierre Izard, SNCF’s general manager for infrastructure.

An SNCF inquiry is now expected to focus on how the piece of metal had become detached.

Transport Minister Frederic Cuvillier has praised the driver of the train, saying his quick actions averted a worse accident.

The worst railway accident in France in living memory took place at the Gare de Lyon in Paris in 1988, when two trains collided, killing 56 people.