Russian scientists have released microscopic images of fragments of the meteorite that hit the central city of Chelyabinsk in February.

A team from the Ural Federal University was able to analyze some of the dozens of samples as soon as they were found.

But the technique they used allowed them to assess the rock’s chemical make-up at the microscopic level even as they snapped pictures of the fragments.

This will provide extra information on the space rock’s formation and journey.

The fragments represent just a small portion of the remains of the 17m-diameter body that struck the Earth’s atmosphere in a spectacular trail of light over the city of Chelyabinsk.

The team, led by Urals Federal University’s Viktor Grokhovsky, determined right away that the overall chemistry of the meteorite was a familiar “chondrite”.

“The fragments contain a standard number of minerals, including olivine, pyroxene, troilite and kamacite. These minerals that can be discovered only in outer space confirm the fragments’ extraterrestrial nature,” he told the Voice of Russia at the time.

But far more information was in the offing. 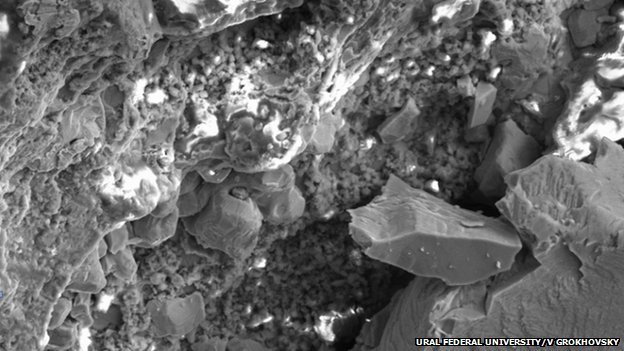 The team was using a scanning electron microscope, which fires a beam of electrons focused onto a tiny part of a sample, scanning around to see how the electrons are deflected and thereby building up a detailed picture of the sample’s nanometre-scale bumps and valleys.

But that process causes the emission of a small amount of X-ray radiation – with the exact energy of the X-rays corresponding to the chemical element present in the focus of the electron beam.

This is where a silicon drift detector comes in – harvesting these X-rays and determining their energy. The result is a series of what are called X-ray maps – pictures of the same sample showing the presence and quantity of different elements.

It is this understanding of the minerals at a microscopic level that goes far beyond simply telling us what the meteorite is made of, said Simon Burgess of Oxford Instruments, which made the X-max silicon drift detector used by the team.

“For the researchers who are looking at this meteorite, it’s going to be telling them information about which (mineral) phase is associated with which,” he told BBC News.

“When they get into more detail beyond what the main chemistry of the meteorite is, they may be looking at processes in terms of how it formed, the temperature it formed at, what its history has been since its formation, possibly things about what happened to it during its impact with the Earth.

“A lot of that you cannot tell just by crushing it up and getting a ‘bulk analysis’; you have to look at the chemistry of the individual parts and associations between the different minerals in the meteorite.”

The X-max technology is in the running for the Royal Academy of Engineering’s MacRobert Award, to be announced on Friday July 19.