Lady Gaga has been keeping a low-profile in recent months after recuperating from her hip surgery and working on her new album.

Now she starts to build buzz around her upcoming album Artpop and new single.

Lady Gaga unveiled a new promotional picture from her new album, which will be released as a phone app. 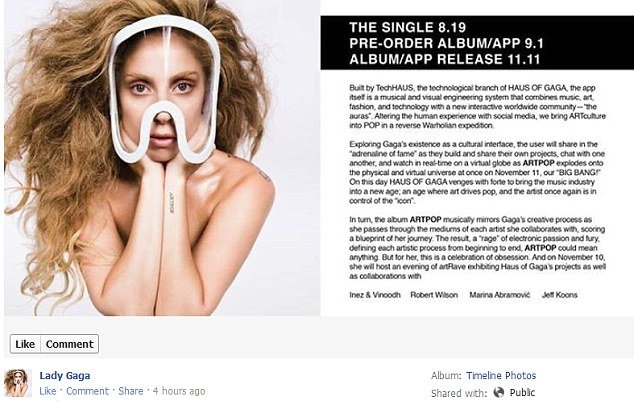 Lady Gaga unveiled a new promotional picture from her new album Artpop, which will be released as a phone app

The photo sees the singer with an unusual visor covering her face.

Lady Gaga announced on Friday that her new single would be released on August 10, with the album/app following on November 11.

Describing the album, the press release said: “The app itself is a musical and visual engineering system that combines music, art, fashion and technology with a new interactive worldwide community <<the auras>>. Altering the human experience with socal media, we bring ARTculture into POP in a reverse Warholian expedition.

“Exploring Gaga’s existence as a cultural interface, the user will share in the <<adrenaline of fame>> as they build and share their own projects, chat with one another and watch in real-time on a virtual globe as ARTPOP explodes into the physical and virtual universe at once on November 11, our <<Big Bang>>.

“On this day, HAUS OF GAGA venges  with forte to bring the music industry into a new age, an age where art drives pop and the artist once again is in control of the icon.

“In turn, the album ARTPOP musically mirrors Gaga’s creative process as she passes through the mediums of each artist she collaborates with, scoring a blueprint of her journey. The result, a <<rage>> of electronic passion and fury, defining each artistic process from beginning to end, Artpop could mean anything. But for her, this is a celebration of obsession.”

The profile photo and backdrop has been removed and replaced with the standard Twitter egg icon.

However, it is believed Lady Gaga will return to Twitter once her single comes out next month.