Duck Dynasty fans from around the world are invited to join the show stars on the Duck Commander Cruise next summer. 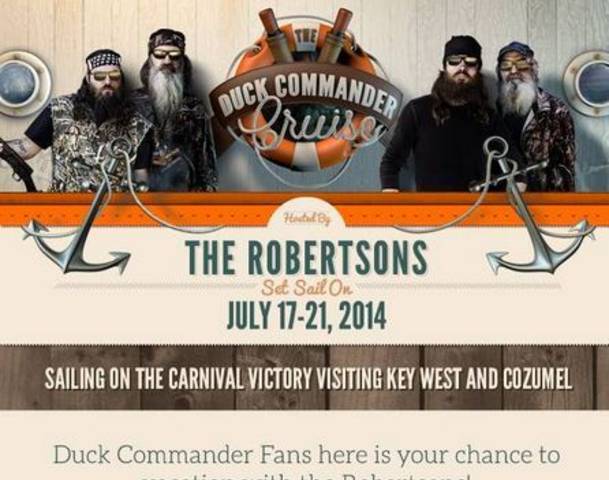 With Willie Robertson in charge of the account, the invite obviously was from the family who wants to meet the fans while sailing the ocean.

The packages start at $749 a person and go up from there. Taking a big cruise liner, the fans will be on the Carnival Victory visiting Key West and Cozumel. The idea of taking to the seas on a family vacation might be perfect, but the date of the trip isn’t until July 2014, so it will be a while (and at least a season of Duck Dynasty) before meeting the family would be possible.

This isn’t the first time fans have been invited on an ocean cruise to mingle with entertainers. There have been artists who have cruised with fans and even actors from the Twilight movie series who hit the high seas. However, it has to be a first that duck hunters decide to cruise to meet fans.

So how is the initial response to the idea of a cruising with duck hunters? The majority of fans are bummed that the cast is expecting people to pay more than a thousand dollars a person to meet them after adding tips and other expenses. Duck Dynasty devotees who waited for the big announcement feel really let down. A cruise catering to a few rich folks who want to vacation 2014 isn’t exactly what people were hoping to hear. Since the show caters to families who are simple folks with budgets, this obviously will leave the majority of the fans on shore watching as the big boat floats away.