Naomi Watts is looking the spitting image of Princess Diana on the new poster of the highly anticipated biopic Diana.

Naomi Watts, 44, shows off her blonde blow dried crop hair do on the promotional image, looking just like the late Princess Diana used to style hers.

The actress also wears regal blue in a glamorous dress and her ears and neck dripping with jewels.

Naomi Watts even wears a ring in the poster, which seems to mimic the ring Prince William gave to Kate Middleton when he proposed to her in memory of his late mother.

The font on the poster gives the tagline: “The legend is never the whole story: Diana.”

The movie still comes just a couple of weeks after a trailer for the film was released. 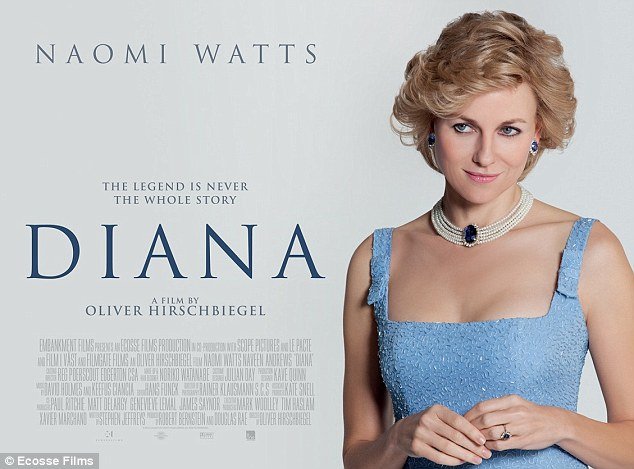 Diana Spencer died in 1997, but this year the People’s Princess has been brought back to life in a film biopic of her life.

In the film stills from the movie, Naomi Watts brings the beloved royal back to life, recreating famous images of the former Princess of Wales.

The film directed by Olivier Hirschbiegel, follows the final years of the British icon’s life before her tragic death in Paris, that forced the world into mourning.

But while the movie trailer shows Naomi on the red carpets, touring an Angolan minefield and fending off paparazzi on the street, the real story centres on her relationship with a British-Pakistani heart and lung surgeon.

Dr. Hasnat Khan had been described by some as “the love of [Diana’s] life” and the pair reportedly ended their romance just weeks before her death.

The BBC, reported that Hasnat Khan “believed the press intrusion would make his life hell” and their hidden 18-month relationship will certainly feature throughout the new biopic with Lost‘s Naveen Andrews taking on the role of the surgeon.

In preparation for the film, Naomi Watts spent six weeks with a dialogue coach and got access to Princess Diana’s actual wardrobe, and Vanity Fair report that she had “visits from the late People’s Princess during [her] dreams” and made use of a prosthetic nose.

Diana is due in U.K. theatres in September – it does not yet have a U.S. release date.