A US judge has ruled today that Apple conspired with publishers to fix the price of electronic books.

But Apple’s spokesman, Tom Neumayr, said Apple would appeal against the ruling and fight “false allegations”.

Five publishers that were originally named as defendants alongside Apple have already reached settlements, including Penguin.

The judge ordered a new hearing to determine damages to be imposed on Apple.

The US Department of Justice said the conspiracy was designed to challenge online retailer Amazon’s dominance of the fast-growing e-books market.

Penguin settled its case for $75 million. Hachette, HarperCollins and Simon & Schuster created a $69m fund for refunds to consumers, while Macmillan settled for $26m.

Judge Cote said: “The plaintiffs have shown that the publisher defendants conspired with each other to eliminate retail price competition in order to raise e-book prices, and that Apple played a central role in facilitating and executing that conspiracy.”

“Without Apple’s orchestration of this conspiracy, it would not have succeeded as it did in the spring of 2010,” she said.

US Assistant Attorney General Bill Baer called the ruling “a victory for millions of consumers who choose to read books electronically”. 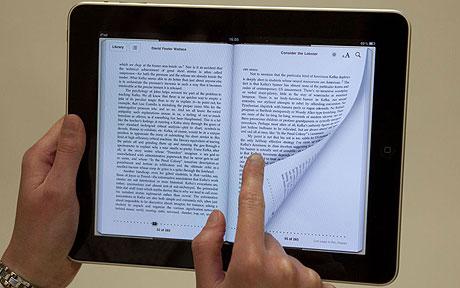 He said the judge agreed with the Justice Department and 33 state attorneys general that executives at the highest levels of Apple orchestrated a conspiracy with five major publishers to raise prices.

Consumer groups in the US cheered the news.

“If we let companies get away with this type of price fixing, consumers will be denied a substantial part of the benefits of the digital revolution,” said Dr. Mark Cooper of the Consumer Federation of America, which had filed a supporting brief in the case.

But after the ruling, Tom Neumayr insisted that Apple had brought innovation and competition to the market, not restricted it.

“Apple did not conspire to fix e-book pricing and we will continue to fight against these false accusations,” he said.

Previously, Apple’s attorney, Orin Snyder, had told the court that Judge Denise Cote would set a “dangerous precedent” if she concluded that Apple manipulated e-book prices.

However, Columbia University law professor Scott Hemphill said today’s ruling was narrow and would be unlikely to set any legal precedent.

“It may send some signals to tech companies about what they can and can’t do,” said Prof. Scott Hemphill.

“But the precedential value is limited because the ruling is by a district court.”

However, he added that the judge in this case took particular pains to anticipate a challenge from Apple – something that chief executive Tim Cook hinted at earlier this year, when he dismissed the idea of a settlement.