Katherine Russell Tsarnaev, the widow of Boston Marathon bomber Tamerlan Tsarnaev, has reportedly started to reject the strict Muslim rules her husband forced upon her.

Katherine Russell, 24, is living at her parents’ home in Rhode Island with her daughter by Tamerlan Tsarnaev, and her family is encouraging her to convert back to Christianity, according to reports.

She has also changed her name back to Katherine Russell from Karima Tsarnaeva, the name she adopted after marrying Tamerlan Tsarnaev, who was killed earlier this year following a police shootout.

“Katherine is slowly starting to change,” a source told the National Enquirer, adding that she is already wearing fingernail polish and eating at fast food restaurants.

It had previously been reported that she drastically changed after meeting Tamerlan Tsarnaev while at a club during her college years.

Katherine Russell is cooperating with officials in the investigation, but claims she had no idea her husband was plotting to bomb the Boston marathon as she was working 80 hours a week as a health care aide.

“Katherine was completely sub­servient to him,” a source told the Enquirer.

“She cowered around him.” 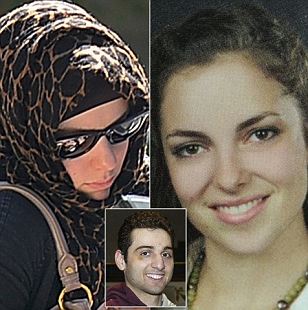 Katherine Russell has not been accused of any wrongdoing, but the FBI have questioned her to find out if she had any clue as to her husband’s plans.

The bombing at the marathon’s finish line on April 15 killed three people and injured more than 260.

Tamerlan Tsarnaev and his brother Dzhokhar, originally from Chechnya, are believed to have carried out the attacks due to their radical jihadist beliefs.

Katherine Russell’s lawyer Joshue Dratel, from New York, said that he joined Russell’s legal team to help her navigate the criminal justice system and to protect her interests.

He said she had spoken with investigators and planned to keep co-operating.

“I don’t see that changing in the foreseeable future,” he said.

“There’s no inconsistency between that and her interests at this point.”

Katherine Russell was widowed when Tamer­lan Tsarnaev was killed in a police shootout on April 19 – four days after he and his younger brother Dzhokhar allegedly set off bombs during the Boston Marathon. Three people were killed in the cowardly attack and 264 more were wounded, sev­eral of whom lost limbs.

Dzhokhar Tsarnaev, 19, is in a prison hospital facing charges that could bring the death penalty.

Tamerlan tsarnaev, 26, died on April 19 after a shootout with police.

Katherine Russell had been living in Cambridge, Massachusetts with her husband and two-year-old daughter, but has been staying with her parents in North Kingstown, Rhode Island, since the day her husband was killed.

Among the questions about Katherine Russell is what she knew or saw in the weeks leading up to the bombing, and in the days after it.

Two U.S. officials have said that Dzhokhar Tsarnaev told investigators the bombs were assembled in the small apartment Katherine Russell shared with her husband.