At least 12 people have died in Alexandria and three in Cairo in clashes between supporters and opponents of ousted President Mohamed Morsi, reports say.

The violence came after three pro-Morsi demonstrators were killed by security forces in another part of the capital.

The army removed Mohamed Morsi from power on Wednesday after millions of people protested over his leadership.

Mohamed Morsi, Egypt’s first freely elected leader, is in detention, as are some senior figures of his Muslim Brotherhood movement.

Early on Saturday, state media reported the Brotherhood’s deputy leader Khairat el-Shater had been arrested at his Cairo home on suspicion of incitement to violence.

The Tamarod [Rebel] movement – which organized recent anti-Morsi protests – accused the ousted president of pursuing an Islamist agenda against the wishes most Egyptians, and of failing to tackle economic problems.

The US State Department issued a condemnation of Friday’s violence and called for all leaders to put a stop to any further aggression.

UN Secretary General Ban Ki-moon has also expressed alarm at the violence, saying that it was for the people of Egypt to determine the way forward – and all people, including women, needed to be part of that process.

Most of those killed during fighting in the Mediterranean city of Alexandria, died from gunshot wounds, said Amr Nasr, head of emergency services in the city.

He told the official Mena news agency that 200 people were injured during clashes in Egypt’s second-largest city. 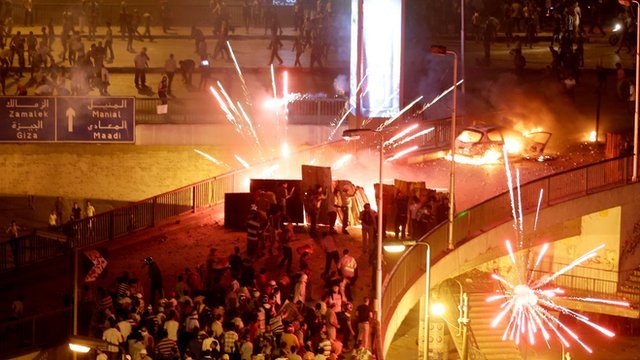 Earlier, after midday prayers, Islamist supporters of Mohamed Morsi staged a series of marches across Cairo – including outside Rabaa al-Adawiya Mosque where tens of thousands massed.

Tensions escalated when a crowd advanced on the nearby headquarters of the Republican Guard, where Mohamed Morsi is believed to be held.

Troops then opened fire on crowds. Three people were killed and dozens wounded, including BBC correspondent Jeremy Bowen whose head was grazed by shotgun pellets.

In the evening, tens of thousands of supporters of the Muslim Brotherhood filled the square near the mosque, as well as nearby streets.

The Muslim Brotherhood’s supreme leader, Mohammed Badie, told the crowd: “We shall stay in the squares until we bring President Morsi back to power.”

He said their protests would remain peaceful and called on the army not to “direct your arms against us”.

Shortly afterwards, the Muslim Brotherhood’s supporters surged across the 6th October Bridge over the Nile river, towards Tahrir Square where anti-Morsi protesters were gathered.

Late on Friday, tanks arrived at the bridge to separate the clashing protesters and the violence died down.

There were clashes in other parts of Egypt on Friday.

Islamist attacks on the Sinai peninsula left five police and one soldier dead.

One protester was killed in the central city of Assiut, and AFP news agency reported another death in Minya.

In Qina in the south, troops opened fire on pro-Morsi activists trying to storm a security building. At least two people were injured.

Firing was also reported in the Suez Canal city of Ismailiya.

Ahead of Friday’s protests, the army command said it would not take “arbitrary measures against any faction or political current” and would guarantee the right to protest, as long as demonstrations did not threaten national security.

“Peaceful protest and freedom of expression are rights guaranteed to everyone, which Egyptians have earned as one of the most important gains of their glorious revolution,” it said.

On Thursday the head of Egypt’s constitutional court, Adly Mahmud Mansour, was sworn in as interim head of state, and he promised to hold elections soon.

On Friday Adly Mahmud Mansour dissolved the upper house – or Shura Council – which had been dominated by Mohamed Morsi supporters and had served as sole legislative body after the lower house was dissolved last year.