Marion Bartoli won the first set in 30 minutes as Sabine Lisicki failed to cope with the enormity of a first Grand Slam final.

The 23-year-old cut a fragile figure and was reduced to tears in the second set, helpless to prevent Marion Bartoli from lifting the Venus Rosewater dish.

Marion Bartoli ended with an ace, collapsing to the ground once victory was hers.

When the stunned 15th seed rose to her feet, she celebrated by climbing to the players’ box to embrace family and friends.

Among those whom Marion Bartoli hugged was her mentor and 2006 Wimbledon champion Amelie Mauresmo, the last Frenchwoman to win at SW19, and her father and former coach Walter.

Marion Bartoli had bossed her opponents during the tournament and her decisive victory over Sabine Lisicki meant she is now the sixth player in the Open era to win a Wimbledon title without dropping a set. 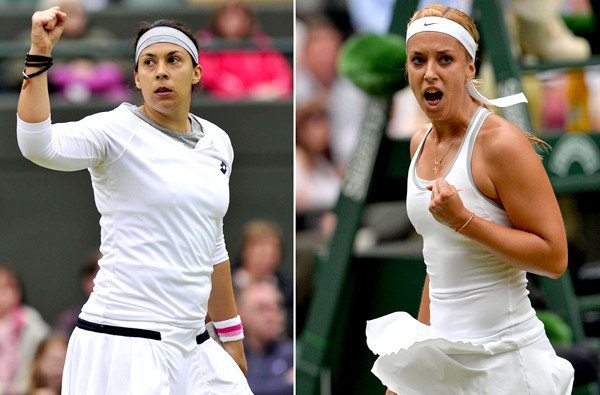 “Honestly I cannot believe it,” said the world number 15, a major winner on her 47th Grand Slam appearance.

“When I was a little girl I dreamed of this moment for so long. Finishing with an ace, in my wildest dreams I’d never believe it.”

It was the final few had predicted and the inexperience of playing on such a grand stage perhaps explained the edgy opening from both finalists.

The unconventional French number one surrendered the first game of the match but her rival followed suit, double faulting to restore parity at 1-1.

Marion Bartoli, five years the senior and seeded nine places higher than the German, settled the quicker, securing the second of two break points in the fourth game for a 3-1 lead.

The experience of losing the 2007 Wimbledon final perhaps helped Marion Bartoli deal with the occasion better.

“I missed out in 2007, I know what it is like and I’m sure Sabine will be here one more time, no doubt about it,” she added.

Marion Bartoli had returned brilliantly throughout the Championships – making 81% of her returns prior to the final – and her ploy of returning from inside the baseline was key to her success over a player known as ‘boom boom’ in Germany.

Sabine Lisicki’s powerful serve had been neutralised and the 23rd seed double faulted again in the sixth game before directing a forehand long to gift Marion Bartoli a 5-1 advantage.

In 30 minutes, Marion Bartoli had secured the opening set and the debutant seemed ill at ease on the same turf where she had defeated top seed Serena Williams in the fourth round.

Sabine Lisicki had opportunities in the second game of the second set but Marion Bartoli held firm.

Double faults blighted the German’s game, a third of the match gifting Marion Bartoli three break points which the Frenchwoman took with an angry overhead at the net to move 3-1 up.

In the fifth game, Sabine Lisicki dissolved into tears as another double fault presented her opponent with a break point.

The German regained her composure, although victory was soon within Marion Bartoli’s sight when the German netted to fall 4-1 behind.

Sabine Lisicki saved two Championship points on her own serve and broke in the eighth game to haul Marion Bartoli back to 5-4.

But Marion Bartoli served out the match, concluding an impressive performance her second ace of the match.