FOX Sports Next’s Amy Campbell, reporting on a top high school football recruiting event in Oregon, was in the midst of interviewing recruiting analyst Chad Simmons when rising star footballer Ermon Lane came crashing into her on the sidelines.

Though Amy Campbell later told the sports broadcasting network that she was unharmed, the entire incident was caught on video and as with many sports and news bloopers, has become an Internet sensation.

In the video, picked up by local television station ABC WPBF, Amy Campbell is listening intently to Chad Simmons speak when Ermon Lane comes running up behind her at full speed to catch a pass.

Screams are heard as Amy Campbell, Chad Simmons, and Ermon Lane all take a tumble and drop off camera.

Though Chad Simmons, who saw Ermon Lane coming at the last minute, tried to block Amy Campbell, he was unable to stop the four-star wide receiver prospect.

At 6”2 Ermon Lane is a powerhouse, and though currently a rising senior at Homestead High School in Florida, weights 193 lbs. He is a highly sought after prospect for Universities such as Miami, Florida State or Florida, according to FOX Sports. 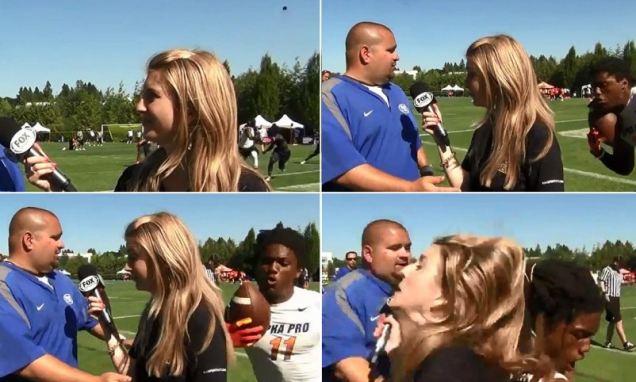 The collision happened at The Opening, a summer recruiting camp for the nation’s top high school football players, which was held the Nike headquarters in Beaverton, Oregon, according to the television report.

In the aftermath of the crash, which went viral on YouTube, Amy Campbell told FOX Sports she was not injured.

“My knee got a little bit bruised,” she said to the sport network.

“It’s sore today, but nothing serious. It could’ve been a lot worse. At least I can take a hit, right?”

Amy Campbell told her network that the crash may have been captured on film, but was not the first incident that day.

“[Ermon Lane] has almost collided with me several times since I’ve been out here,” she said, explaining that earlier in the day the high school football star narrowly missed her when he came out of the end zone.

Taking it in her stride, Amy Campbell joked around about the incident on Twitter, tweeting: “I can take a hit #grind.”

She kept her good humor when one follower commented: “I’ve watched this no fewer than 10 times in the past few minutes! LOL! Sorry,” to which Amy Campbell responded: “It gets funnier every time.”

She even posted a picture on the social media website of her and Ermon Lane after the collision with the caption: “Still friends!”

Amy Campbell told FOX Sports that her favorite part of the video was when the referee declares the pass completed, ignorant of the accident on the sidelines.

“That to me is just the icing on the cake right there,” Amy Campbell said.