Ireland Baldwin tweeted a picture on 4th of July of her wearing a bikini while paddleboarding with boyfriend Slater Trout in Idaho.

The 6ft 2in beauty showed off her toned figure in the bright orange bikini as she put her arms around Slater Trout, 18, from behind while he paddled.

Ireland Baldwin, 17, also posted a picture of the pair kissing after taking a dip in the lake. 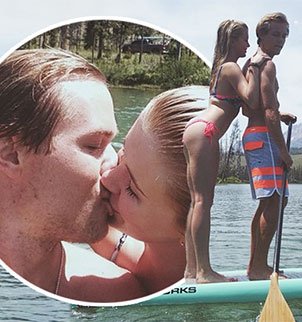 She accompanied the photo with the caption: “Happy 4th. About to embark on a camping trip with @slatertrout. Hope you all have a fun holiday with your loved ones!”

Ireland Baldwin, who is attempting to become the fashion world’s latest “It Girl”, told People magazine recently: “I have never met anyone who is a more incredible person in my life,” she said, referring to Slater Trout.

“I would say he is my best friend. We can act stupid in public, private, or wherever and we are always laughing.”

Slater Trout then chimed in: “We don’t do normal stuff. We go paddle boarding with humpback whales in Maui.

“We go on athletic dates. And very romantic ones too. Like we will go to like a bluff and star gaze and go on trail runs and walk the dogs.”

Despite Ireland Baldwin living in Los Angeles with mother Kim Basinger, she still makes time to visit her boyfriend “once a month”.