The Statue of Liberty, shut last year after Superstorm Sandy, has reopened to the public on Independence Day.

Crowds are flocking once again to see the New York monument, which was swamped by tidal surges during post-tropical cyclone Sandy in October.

Events are also being held in Boston, Washington, Atlanta, Philadelphia and New Orleans to mark the US holiday.

Security precautions will be tight at major parades and fireworks displays.

The 151-ft Statue of Liberty reopened on Thursday morning at a ribbon-cutting ceremony attended by New York’s mayor.

Most of Liberty Island, the attraction’s home off lower Manhattan, was deluged by last autumn’s powerful storm.

Although the 127-year-old Lady Liberty herself was unscathed, there was widespread damage to her 12-acre site.

Railings, docks and paving stones were smashed, while electrical systems, sewerage and boilers were wrecked.

Hundreds of National Park Service workers have been cleaning up the mud and debris, with some repairs still under way.

The neighboring Ellis Island, once the nation’s busiest gateway and home to a famous immigration museum, suffered far worse in the storm and remains closed.

The damage to both islands has been estimated at $59 million. 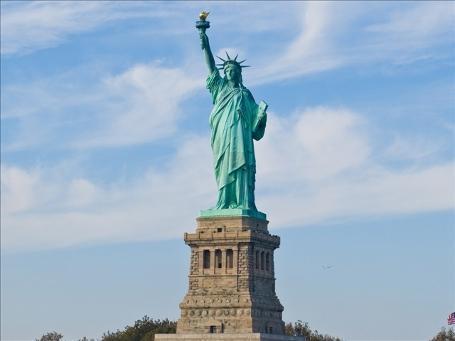 The Statue of Liberty, shut last year after Superstorm Sandy, has reopened to the public on Independence Day

“This to us, Liberty Island, is really about a rebirth,” Heather Leykam, who came to see the statue with her husband and three children from their home in Brooklyn, told the Associated Press news agency.

“It is a sense of renewal for the city and the country.”

New York City will later stage its annual fireworks display over the Hudson River with live performances by Taylor Swift and others.

At nearby Coney Island in Brooklyn, hungry competitors gathered for the annual Nathan’s Famous hotdog-eating contest.

Joey “Jaws” Chestnut devoured 69 hotdogs and buns in 10 minutes to beat his own world record, successfully defending his title for the seventh time.

The women’s event was won by Sonya Thomas, who scoffed nearly 37 hotdogs and buns in the same time.

Across the country, star-spangled bunting will be rolled out for celebrations, picnics and barbecues.

Boston is to stage its first major public gathering since the deadly bombings at the city’s marathon on April 15. Law enforcement officials have said those blasts were originally intended for 4th of July.

A US national security official told Reuters news agency on Wednesday that intelligence agencies were unaware of any plot timed to coincide with the holiday.

Police will use hand-held chemical detectors, radiation scanners and camera surveillance to screen crowds at some of Thursday’s events.

In Washington, a 17-minute fireworks display will take place on the National Mall with live music by Barry Manilow and Neil Diamond.

Independence Day commemorates the Declaration of Independence on 4 July 1776 from Great Britain during the war of the American Revolution.