According to the American Farm Bureau Federation, which launched an informal price survey this year looking at the cost of hot dogs, cheeseburgers and other Independence Day fare, 2013 Fourth of July picnic costs $6 per person.

A typical summertime picnic averages $57.20 for 10 people, or $5.72 per person, according to the group, which puts out a similar estimate for Thanksgiving.

“Five dollars a person for a special event cookout is affordable for most people,” said John Anderson, chief deputy economist with the American Farm Bureau Federation.

“We certainly know that there are people who struggle with affording food and other necessities, but in general, we’re blessed with very affordable food in this country.”

The group puts together a similar annual informal price survey about Thanksgiving dinner fare. Last year, the group said a turkey dinner with all the trimmings would cost about $49.48 for 10, or just under $5 per person. 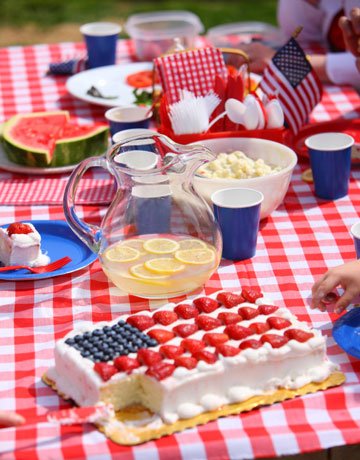 Fourth of July 2103 picnic costs less than $6 per person, according to an American Farm Bureau Federation survey

However, since this year marks the group’s first Fourth of July price survey, John Anderson said the group doesn’t have concrete numbers to compare with the 2013 figures.

“We expect the general level of prices to go up around 2 per cent a year,” John Anderson said.

“That’s kind of normal price inflation, and… I certainly think that we’re in the ballpark of those normal price changes over the past year.”

That list doesn’t include beer, which some Americans are shelling out a bit more for this year.

“More people are trading up to premium, more expensive beer,” said John Davie, president and CEO of Boston-based Consolidated Concepts, which works with thousands of food and restaurant outlets to help them save money on food and other supplies.

John Davie also said the price of chicken breast has increased since this time last year.

Shopper Debra Graham agrees with that.

“It’s almost as cheap to buy steaks as to do chicken or burgers,” she said outside a Little Rock grocery store where she bought catfish for a Fourth of July fish fry.

But Debra Graham, 52, said other prices seemed about as high as they usually are.