Adly Mansour, top judge of Egypt’s Constitutional Court, is to be sworn in as interim leader, hours after the army ousted President Mohamed Morsi and put him under house arrest.

Army chief General Abdul Fattah al-Sisi announced the move on Wednesday, in what Mohamed Morsi said was a military coup.

The move comes after days of mass rallies against the Islamist president.

Protesters accused him and the Muslim Brotherhood of pursuing an Islamist agenda for the country and of failing to tackle Egypt’s economic problems.

The president had appeared to protesters to be economically out of his depth, and had not given them the reassurances they wanted that he could address rampant poverty.

Mohamed Morsi’s opponents celebrated through the night in Cairo’s Tahrir Square, as the army announced it had suspended the constitution and pledged to hold new elections.

But clashes erupted overnight between Mohamed Morsi supporters and the security forces in Cairo and Alexandria, leaving seven protestors dead. A further 10 deaths have been reported in confrontations in other parts of the country.

Gehad el-Haddad, a spokesman for Mohamed Morsi’s Muslim Brotherhood, said the ousted leader had been put under house arrest and the “entire presidential team” was in detention.

His father, senior Morsi aide Essam el-Haddad, and Saad al-Katatni, head of the Brotherhood’s political wing, are among those held.

The state-run al-Ahram newspaper reported that arrest warrants had been issued for 300 leaders and members of the Muslim Brotherhood. 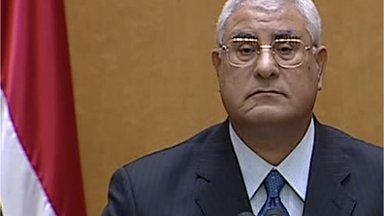 US President Barack Obama has said he is “deeply concerned” by the latest turn of events and called for a swift return to civilian rule.

The removal of the president followed four days of mass protests against Mohamed Morsi and an ultimatum issued by the military, which expired on Wednesday afternoon.

In his televised speech, General Abdul Fattah al-Sisi said the armed forces could ignore the call of the Egyptian masses.

He spoke of a new roadmap for the future, and said Adly Mansour would be given the task of “running the country’s affairs during the transitional period until the election of a new president”.

Adly Mansour, currently chief justice of the Supreme Constitutional Court, is scheduled to be sworn in as head of state at around 10:00.

The army moved quickly after General Abdul Fattah al-Sisi ‘s speech, with military vehicles seen fanning out across the capital.

TV stations belonging to the Brotherhood went off air and state news agency Mena said managers at the movement’s Misr25 channel had been arrested.

The statement asked Egyptian citizens to “abide by the constitution and the law and not to respond to this coup”.

Mohamed Morsi, who had pledged his life to defend constitutional legitimacy, accused the army of “taking only one side”.

One protester, Omar Sherif, told AFP news agency: “It’s a new historical moment. We got rid of Morsi and the Muslim Brotherhood.”

After General Sisi’s address, both Pope Tawadros II – the head of the Coptic Church – and leading opposition figure Mohammed ElBaradei made short televised speeches about the new roadmap for Egypt’s future which they had agreed with the army.

Mohammed ElBaradei said the roadmap aimed for national reconciliation and represented a fresh start to the January 2011 revolution.

“This roadmap has been drafted by honorable people who seek the interests, first and foremost, of the country,” added Pope Tawadros.

Opposition leader and former Arab League chief Amr Moussa told AFP that consultations for a government and reconciliation “will start from now”.

However his term in office was marred by constant political unrest and a sinking economy.

The mass protests at the weekend that led to the army’s intervention were called by the Tamarod (Rebel) movement, in response to worsening social and economic conditions.

But there has been a growing sense of discontent since last November, when Mohamed Morsi issued a controversial constitutional declaration granting himself extensive powers.

Mohamed Morsi’s moves to entrench Islamic laws and concentrate power in the hands of the Muslim Brotherhood also alienated liberals and secularists.