Danica Patrick is to return this weekend to Daytona 500, the track where she experienced her greatest stock-car moment.

Danica Patrick, 31, just won’t have the car she used to achieve her record-setting feat in the Daytona 500.

She became the first woman to win a pole for a Sprint Cup race and then a week later scored the highest finish for a woman in Daytona 500 history by placing eighth. But she wrecked her Daytona car in May at Talladega Superspeedway.

Danica Patrick will instead have the car she tested with at Daytona in January and again at a Goodyear tire test there in April.

“We lost that poor [pole-winning] car at Talladega, so we are going back with our backup, which is a really good car anyway,” Danica Patrick said.

“We tested with it at the beginning of the year, and I expect it to go in a similar fashion. I think we will still be pretty fast.

“Will we qualify on the pole and run in the top three or [top] five all day? I don’t know. Maybe.”

Danica Patrick ran third throughout the race but got shuffled back to eighth on the final lap of the Daytona 500.

“The heat always changes things a little bit, but it’s a different car and it’s going to be a different Hendrick engine,” Danica Patrick said.

“All that stuff just leads to a slightly different weekend. But I expect it to be somewhat similar, at least from a good standpoint in my head.”

That’s important, considering it hasn’t been the best of seasons for Danica Patrick, who is 27th in the Cup standings and has not had another top-10 finish and just two other top-20 finishes in her first full-time Cup season. 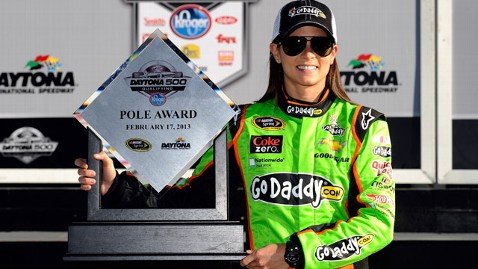 Danica Patrick is to return this weekend to Daytona 500, the track where she experienced her greatest stock-car moment

Given her ability to go fast on restrictor-plate tracks, her Stewart-Haas Racing crew chief believes she can win at Daytona this weekend.

“We felt like we had a shot to win it [in February], ran in the top three or four all day and had a fast car, and it came down to the last lap and [she] kind of got snookered a little bit there at the end,” crew chief Tony Gibson said.

“We felt like we were definitely in contention to win it, so we’re going back there with the same mindset, to try to be the fastest car in qualifying and try to close the deal at the end of this thing.”

Danica Patrick said that all of the advice she has gotten after the Daytona 500 is that she really didn’t do anything wrong on the final lap. She was more a victim of circumstance.

“I was just frustrated that I didn’t have a better plan,” Danica Patrick said.

“Tony [Stewart] said to me, <<I really feel like you had more to lose in your position than you had to gain by trying something, so I think that you did the right thing>>.

“That made me feel better – a little bit. Was I still mad that I went from third to eighth on the lap? No, [but] I was still disappointed in it.”

It’s disappointing whenever a driver has a chance to win and doesn’t capitalize. But for Danica Patrick, it also was disappointing because her IndyCar background helps more at Daytona than possibly any other track.

Danica Patrick knows that a good finish can help relieve pressure on her team throughout the season.

“It’s obviously a track that we feel like we can win at,” Tony Gibson said.

“I feel like that’s right in Danica’s wheelhouse there. She likes the drafting. She likes the high speeds, and I think most of that comes from the IndyCar side of it. … We work hard every week, but when it comes to the restrictor-plate racing, especially going to Daytona, we go all out.

“We put every little thing we can into those cars, because we know that that’s a track that we can win at and we can really do some damage, on the good side.”

“You want your performance to be good because you don’t want to let your fans down,” Tony Gibson said.

“You don’t want to let her fans down.

“When you’ve got to look a little girl in the eye and she asks you what happened last week or why didn’t Danica win, it’s pretty hard to come up with an answer that’s going to satisfy a little girl.”