David and Jackie Siegel were just trying to live the American Dream: succeed at business, own a big house, enjoy the spoils of their labor.

But after achieving those dreams, they found themselves wanting more – much, much more.

David and Jackie Siegel’s 26,000-square-foot house was simply not enough. Happiness could be found, the couple thought, only by building the largest house in all of America: a sprawling, 90,000-square-foot mansion in Orlando, Florida, modeled after the French palace of Versailles, complete with a bowling alley and roller-skating rink, a wing for the children, 10 kitchens, and $5 million of marble.

But when the U.S. economic bubble burst, the Siegels, who were so wealthy they seemed untouchable, turned out to be no different from the tens of thousands of families who lost their far-humbler dream homes. And film director Lauren Greenfield  was there to capture their financial downfall, from Jackie Siegel’s $1-million clothing-budget zenith to the family’s stuck-in-coach-class nadir.

The drama of Lauren Greenfield’s recent documentary, The Queen of Versailles, first gripped audiences at the 2012 Sundance Film Festival in January. Screened on the opening night, the film won her an award for best director and has since become one of the most-watched documentaries of the year, prompting speculation that it could earn an Oscar nomination.

“It was the same [old] story about the American dream, but really about the flaws as much as the virtues of that dream, as well as about the mistakes that were made because of the economic crisis,” Lauren Greenfield said.

“Jackie and David’s story, even though it was extreme, was kind of symbolic of the mistakes we all made on different levels.”

In one scene, a nanny asks Jackie Siegel – a former beauty queen from a small town, who’s 30 years David Siegel’s junior – if one large, cavernous room in Versailles is a future bedroom.

“No, that’s my closet!” Jackie Siegel exclaims, her eyes wide, grinning as if she almost can’t believe her good fortune. Later in the film, after the family arrives in an airport after having flown coach (a first for the children), Jackie Siegel walks up to a rental-car counter and asks the clerk earnestly: “What is my driver’s name?” 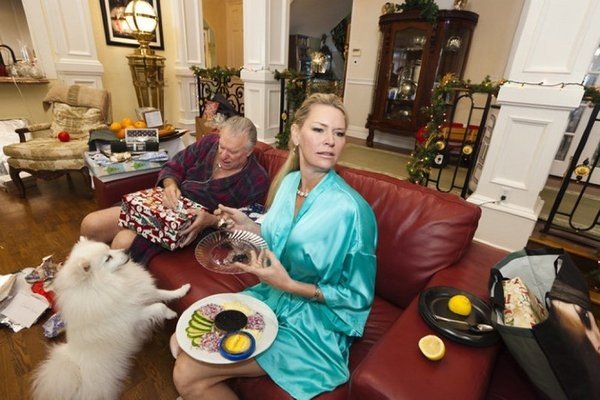 Lauren Greenfield became interested in the lives of the 1 percenters as an undergraduate, where she studied photography under Barbara Norfleet, Ph.D., then a lecturer and curator of still photography at the Carpenter Center for the Visual Arts, who had produced a book called All the Right People, about the WASPs of the Northeast. “Part of what drove her [Barbara Norfleet] to make that book was that in the archives there were very few photos of rich people,” Lauren Greenfield said.

“The photos that existed…were only commissioned portraits by the subjects themselves, or society pictures which didn’t have any context because they weren’t natural moments. For me, when I started the Queen of Versailles, it was a little bit similar. We see so much of the life of the affluent as these packaged, manipulated reality-TV shows, or advertising. I wanted to do a real-life look at this family, particularly because Jackie and David had this other quality – a down-to-earth American quality. They came from humble origins and were a rags-to-riches story.”

Lauren Greenfield met Jackie Siegel by chance at a Hollywood party and immediately fell for the couple’s tale. (The filmmaker had asked if she could photograph Jackie Siegel’s ostentatious metallic purse; the image eventually became one of Time magazine’s “Photos of the Year,” illustrating the “high life” and “gilded age” of America). But that was in 2007, when David Siegel’s company – the largest privately owned time-share company in the world – had netted him a billion dollars.

When Lauren Greenfield began filming in 2009, she didn’t expect her little movie (she and her husband, Frank Evers, financed the film, calling it “a labor of love”) about the biggest McMansion ever built would even be seen in theaters. But as the Siegels’ fortunes plummeted unexpectedly before her camera’s lens, Lauren Greenfield knew her film would have a far wider appeal.

Lauren Greenfield – a photographer and filmmaker who has captured youth culture through projects like HBO’s THIN, a documentary about an eating disorder center in Coconut Creek, Florida, and has had her photographs published in The New York Times, Vanity Fair, The New Yorker, and National Geographic – got to know her subjects intimately, practically moving in with them as she filmed up to 12 hours a day. She and Jackie became friends. But Lauren Greenfield admits she was appalled by their inability to control their spending, even when everything pointed to impending disaster. The tipping point was David’s refusal to sell his other obsession, a $600-million, high-end time-share complex on the Las Vegas strip that he’d personally financed through loans. By 2010, the time-share market had dried up because so many buyers had overextended themselves on their unit mortgages.

“I wasn’t rooting for David to keep the tower, because I think it was a valuable lesson learned, in terms of the overreach,” she says.

“I think that’s the power [of the movie]. David speaks the morality tale at the end when he says, ‘We need to learn to live within our means, we need to get back to reality. I was using cheap money to buy big buildings and I thought it would go on forever, and when they took away the money I was like, <<Whoa>>.

“In that sense there is a happy ending, because you see what’s really important to them,” Lauren Greenfield continues.

“For us as viewers, it gives us a chance to think about what’s important, what our values are, and what is enough.”

Although David Siegel is now suing Lauren Greenfield for defamation (Greenfield insists the lawsuit is more about money than ill will: at a recent premiere of the film in Tampa, David and Jackie Siegel rented out two theaters and showed up in a party bus to watch the movie with all of their friends), she still says she wouldn’t have changed anything.

“I was extremely lucky because they opened their doors wide when things were great, but they kept those doors open equally wide when things got tough,” she explains. “Jackie would often say, <<Our story is like so many other people’s, but on a bigger level and with bigger proportions>>.”