Cleveland kidnapper Ariel Castro has asked permission today to visit the six-year-old daughter Jocelyn he fathered with Amanda Berry, one of the women he stands accused of keeping captive for ten years at his home.

At the end of a pre-trial hearing on Wednesday, Ariel Castro, bearded with his chin tucked to his chest for most of time, asked to see Jocelyn he had with kidnapping victim Amanda Berry.

Cleveland judge Michael Russo denied the request, saying: “I just think that would be inappropriate.”

Amanda Berry was dramatically rescued from Ariel Castro’s Cleveland home along with Gina DeJesus, Michelle Knight and her 6-year-old Jocelyn on May 6.

The three women had been kept prisoner by Ariel Castro for almost ten years and suffered systematic rapes, beatings and induced abortions at the hands of the 52-year-old former school bus driver.

Amanda Berry, now 27, is living currently with her sister Beth Serrano in Cleveland and is said to be suffering from the horrifying memories of her ordeal at the hands of her captor.

Ariel Castro was found competent to stand trial at the hearing today.

An examination found that Ariel Castro is mentally able to understand the charges and assist attorneys in his defense, Cuyahoga County judge said. 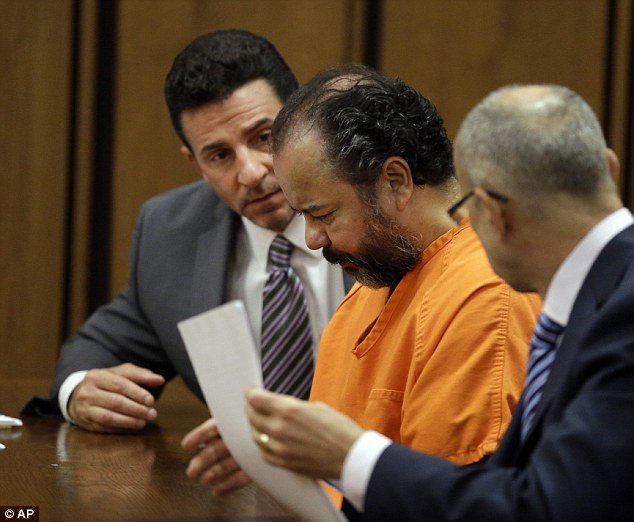 At the end of a pre-trial hearing, Ariel Castro asked to see daughter Jocelyn he had with kidnapping victim Amanda Berry

He has pleaded not guilty to a 329-count indictment that includes multiple kidnapping and rape charges. He’s being held on an $8 million bond.

Cleveland authorities accuse Ariel Castro of kidnapping Michelle Knight, Gina DeJesus and Amanda Berry between 2002 and 2004 when they were 20, 14, and 16 years old.

Also on Wednesday, prosecutor Tim McGinty said a meeting is planned for July 11 to discuss the possibility of seeking the death penalty for Ariel Castro, who faces aggravated murder charges stemming from allegations that he caused the deliberate termination of one of the women’s pregnancies.

Tim McGinty invited Ariel Castro’s attorney Craig Weintraub to submit evidence to him before the meeting to support an argument against the death penalty in the upcoming discussions.

Ariel Castro’s attorneys have previously hinted that he might plead guilty if talk of capital punishment was taken off the table.

Tim McGinty said prosecutors would be going back to the county grand jury to seek more charges against Ariel Castro, but he didn’t know when that would happen.

Ariel Castro has pleaded not guilty to a 329-count indictment alleging he kidnapped Michelle Knight, Amanda Berry and Gina DeJesus off the streets between 2002 and 2004 and held them for a decade in his two-story home in a rough Cleveland neighborhood.

He fathered a six-year-old daughter child with Amanda Berry and is accused of starving and punching Michelle Knight to cause her to miscarry.

Ariel Castro was arrested on May 6, shortly after one of the women broke through a door at the home and yelled to neighbors for help.

The trial is scheduled for August 5, but judge Michael Russo said it could be delayed. Another hearing is set for July 24.

Ariel Castro was indicted on 139 counts of rape, 177 counts of kidnapping, seven counts of gross se***l imposition, three counts of felonious assault and one count of possession of criminal tools.

The indictment alleges Castro held the women captive, sometimes chaining them to a pole in a basement, to a bedroom heater or inside a van.

It says one of the women tried to escape and he assaulted her with a vacuum cord around her neck.

The indictment covers the period from August 2002, when the first of the women, Michelle Knight, disappeared, to February 2007.