Home World Africa news Michelle Obama and Laura Bush complain about how the White House can...

First Ladies Michelle Obama and Laura Bush attended the African First Ladies Summit in Tanzania where they complained about how the White House can feel like a prison.

“There are prison elements to it. But it’s a really nice prison,” Michelle Obama said at the Tuesday panel in Tanzania.

Her predecessor, Laura Bush, then added that the chef is an addition unlike other prisons, and Michelle Obama brought it back to the point, saying: “You can’t complain.  But there is definitely elements that are confining.”

The conversation came up as Michelle Obama and Laura Bush were interviewed by an American journalist about how African first ladies can take a public stand and use their spotlight for good.

The Democrat and Republican said that they both grow frustrated at how the public focuses on trivial aspects of their appearance- like Michelle Obama’s famous bangs- rather than the causes that are close to their heart.

“We take our bangs and we stand in front of important things that the world needs to see. And eventually, people stop looking at the bangs and they start looking at what we’re standing in front of,” Michelle Obama said.

Laura Bush, whose hairstyle has largely stayed the same since she and her husband first entered the White House in 2000, added: “Our daughter, Barbara, cut bangs at the same time Michelle did. They commiserated.” 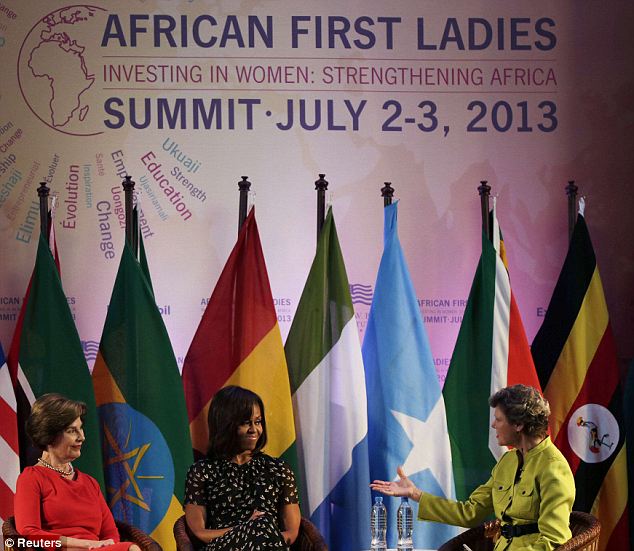 “I was doing what Barbara was doing. I was just following her lead,” Michelle Obama joked.

The Tuesday panel was a very public display of mutual affection between the two first ladies, moderated by journalist Cokie Roberts- who works for ABC but was also appointed onto President George W. Bush’s Council on Service and Civic Participation.

Michelle Obama said that she made a point of spending some time with Laura Bush during their overlapping trips to Africa because: “I like this woman.”

“It’s sort of a club, a sorority, I guess,” Laura Bush said.

Michelle Obama praised Laura Bush and her staff for helping with their transition into the White House, but both women complained about the steep learning curve they faced.

“Nothing prepares you for this role. I mean, it is so startling that the transition of power in the United States happens so quickly that you don’t have access to the house until the President takes the oath of office,” Michelle Obama said.

“I remember walking into that house and I didn’t even know where the bathrooms were. But I had to get ready for a ball. It was like, and I’ve got to look nice? It’s like, what door is this, and you’re opening up all these doors, and you can’t find your toothpaste, you don’t know where your kids are.”