People are reported to have ransacked the building in the eastern Moqattam district and also set it on fire.

Eight people have been killed outside since Sunday, security sources say.

Earlier, the opposition movement behind the protests that saw millions take to the streets across Egypt on Sunday gave Mohamed Morsi until Tuesday to resign.

Tamarod (Rebel) said Mohamed Morsi would face a campaign of civil disobedience if he did not leave power and allow elections to be held.

Protesters across Egypt have accused the president of failing to tackle economic and security problems since being elected a year ago. His supporters have insisted he needs more time.

Millions of people attended demonstrations across the country on Sunday to demand Mohamed Morsi step down.

The crowds seen in Cairo’s Tahrir Square were the biggest since the 2011 revolution that toppled Hosni Mubarak.

Overnight, protesters threw petrol bombs and rocks at armed guards inside, who retaliated by firing at them. 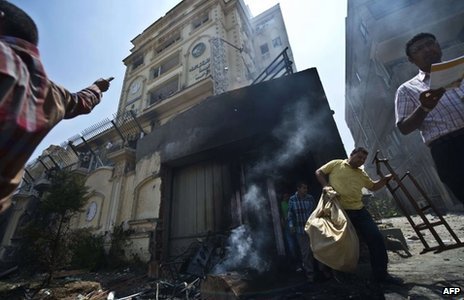 On Monday morning, the protesters stormed the six-storey building and began throwing objects of broken windows. One protester was seen removing the Muslim Brotherhood sign, while an Egyptian flag was flown from a balcony.

A Muslim Brotherhood spokesman blamed the violence on “thugs” and said it would be demanding the police explain why officers had failed to protect the group’s headquarters, according to the Reuters news agency.

Two people inside had been injured by fires before a Brotherhood security detail could evacuate them on Monday morning, he added.

Earlier, Tamarod issued a statement saying the protesters would give Mohamed Morsi until 17:00 on Tuesday to leave power and allow state institutions to prepare for early presidential elections.

Otherwise, people would begin a campaign of “complete civil disobedience”, the group warned.

It urged “state institutions including the army, the police and the judiciary, to clearly side with the popular will as represented by the crowds”.

The group also rejected offers of dialogue from the president.

“There is no way to accept any half measures,” it said.

“There is no alternative other than the peaceful end of power of the Muslim Brotherhood and its representative, Mohamed Morsi.”

On Saturday, Tamarod said it had collected more than 22 million signatures – more than a quarter of Egypt’s population – in support.

But Mohamed Morsi was defiant in an interview published on Sunday, rejecting the opposition calls for early presidential elections.

“If we changed someone in office who [was elected] according to constitutional legitimacy – well, there will be people opposing the new president too, and a week or a month later they will ask him to step down,” he told the Guardian newspaper.

He said he would not tolerate any deviation from constitutional order.

“There is no room for any talk against this constitutional legitimacy. There can be demonstrations and people expressing their opinions,” Mohamed Morsi added.

“But what’s critical in all this is the adoption and application of the constitution. This is the critical point.”