Starting with 1st of July 2013 Croatia has become the 28th member of the European Union, with crowds joining celebrations in the capital Zagreb.

Fireworks lit the sky as membership became effective at midnight on Sunday, with President Ivo Josipovic describing the event as historic.

But correspondents say enthusiasm for the EU in the country has been dampened by the eurozone crisis, and Croatia’s own economic problems.

Celebrations took place in the central square of Zagreb, with fireworks and music including Beethoven’s Ode to Joy, the European anthem.

President Ivo Josipovic said it was “a great and joyful day for our homeland”.

“This the day when we open a new chapter in the thick book of our history,” he added. 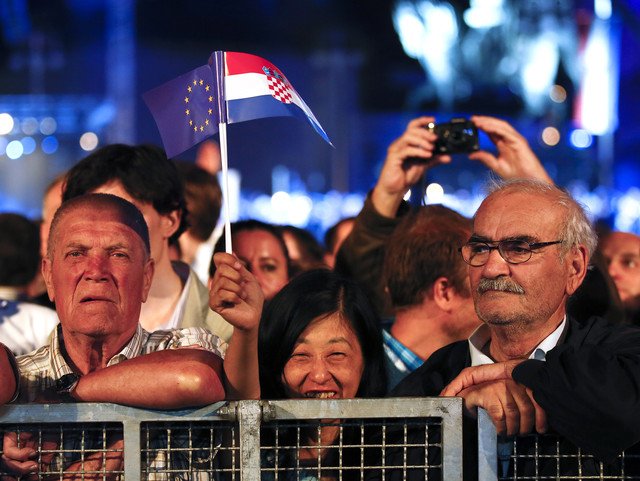 Earlier he told a meeting of EU and regional leaders: “The accession of Croatia to the European Union is confirmation that each one of us belongs to the European democratic and cultural set of values.”

Croatian officials then unveiled EU signs and removed customs posts at the borders with Slovenia, the first former Yugoslav republic to have joined the bloc, and with Hungary.

Croatia is the first new EU member since Romania and Bulgaria joined in 2007. It is 10 years since it applied.

Croatia’s split from Yugoslavia triggered a 1991-1995 war to secure its independence.

But with one in five unemployed and Croatia’s national debt officially classed as junk, some Croatians feel joining an economic bloc with its own serious troubles will do little to improve their prospects.

“Just look what’s happening in Greece and Spain! Is this where we’re headed?” asked pensioner Pavao Brkanovic in a market in the capital.

“You need illusions to be joyful, but the illusions have long gone,” he told Reuters news agency.

Concerns about Croatian corruption and organized crime remain among some EU leaders, and Croatia will not yet join the single currency nor the visa-free Schengen zone.

But advocates of EU membership say despite this, their case remains a persuasive one.

Two-thirds of Croatians voted in favor of accession last year.

“It’s important for us primarily for the long term guarantees of political stability and then everything else – the single market too,” said Croatia’s First Deputy Prime Minister, Vesna Pusic.

The EU itself has given Croatia a clean bill of health – and praised reforms which improve the rule of law and tackle corruption.

It hopes the other countries of the former Yugoslavia will be encouraged to join – and secure long-term peace for an historically turbulent region.