The Macy’s 4th of July Fireworks Spectacular is an annual television broadcast of the Independence Day fireworks show in New York City.

The event has been broadcast annually either on WPIX-TV, syndication or NBC since 1977, with the exception of 1986 when the pyrotechnics were held as part of the weekend-long rededication of the Statue of Liberty. Those fireworks were broadcast on ABC as part of the coverage.

The roots of the annual Macy’s fireworks show can be traced back to the Bicentennial of the United States of America, the 200th anniversary of the adaptation of the Declaration of Independence in 1976 as New York City staged a fireworks show produced by Walt Disney Productions as part of that city’s celebrations on July 4th of that year.

Since 1977, the Macy’s Department Store, whose home base and main store are based in Manhattan have hosted an annual pyrotechnic celebration of America’s birthday with a half-hour, 40,000 shell show from barges on either the East River or the Hudson River. The show is set to a musical soundtrack synchronized to the pyrotechnics. From 1977 until 1999 (except for 1986), Tribune Broadcasting-owned WPIX-TV broadcast the program, with the program syndicated from about 1992 until 1999. As a part of a new contract between NBC and Macy’s for the annual Thanksgiving Day Parade starting in 2000, NBC acquired national telecast rights, broadcasting them live in the Eastern and Central time zones.

A Brief History of Fireworks

Provided by Fireworks in America
“The day will be most memorable in the history of America. I am apt to believe that it will be celebrated by succeeding generations as the great anniversary festival. It ought to be solemnized with pomp and parade, bonfires and illuminations [fireworks] from one end of this continent to the other, from this time forward forever more.”

So wrote John Adams on July 3, 1776 to his wife after the Continental Congress had decided to proclaim the American colonies independent of England. Fireworks were associated with Independence Day celebrations even before the signing of the Declaration.
The discovery of gunpowder and the invention of the first fireworks (bamboo cases or rolled paper tubes filled with explosives) are traditionally credited to the Chinese, although India is also a likely source. 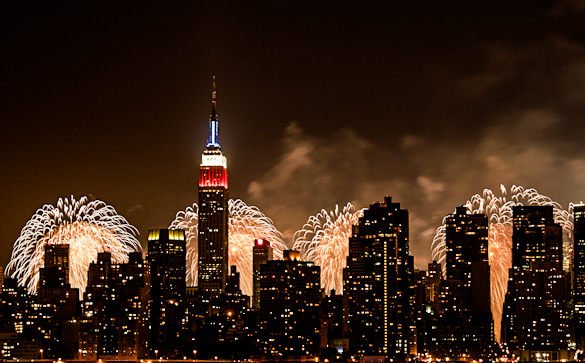 The sound of these first firecrackers, which appeared about 1,000 years ago, was so loud that the Chinese were soon convinced that the noise would scare away evil spirits. Then almost any event – be it birth, death, wedding, coronation or New Year celebration – became a fit occasion for the noisemakers.
Fireworks made their way to Europe sometime in the 13th century, probably carried back from the East by Crusaders. Their popularity grew, and by the 15th century they were widely used for religious festivals and public entertainment. The Italians were the first Europeans to manufacture fireworks and were the second undisputed European masters of fireworks-making through the end of the 17th century. Their wares were used all over Europe to mark great occasions.
The first recorded display in England celebrated the wedding of Henry VII in 1487. William Shakespeare mentions them several times in his plays, and Elizabeth I enjoyed them so much she appointed a “Fire Master of England”.

James II was so delighted with his coronation display that he knighted his fire-master and the Holy Roman Emperor Charles V also valued fireworks – his army contained “fire workers” whose sole function was to stage victory displays.
Fireworks displays became more and more extravagant as the years passed, although events were not always the spectacles they were designed to be. To celebrate the end of the War of the Austrian Succession in 1742, George II ordered an elaborate display and brought in the Italian experts. The preparations took six months, and the result was a huge machine with almost 11,000 rockets and pinwheels surrounding the structure. Handel’s Music for the Royal Fireworks, which included the firing of one hundred brass cannons, was commissioned especially for the occasion. Just as the event was getting underway, an argument broke out between the English and Italian fireworkers, and the North Pavilion of the machine exploded as a result. The show went on, but proved to be a great disappointment. Some called it “a grand whim for posterity to laugh at.”
The earliest settlers brought their love of fireworks to this country. Firings of black powder were used to celebrate holidays and to impress the natives. This fascination with the noise and color of fireworks did not weaken with the passage of time. Pranksters in the colony of Rhode Island caused enough problems that in 1731 a ban was established on the mischievous use of fireworks.
By the time of the American Revolution, fireworks had long played a part in celebrating important events. It was natural, then, that not only John Adams but also many of his countrymen should think of fireworks when independence was declared. The very first celebration of Independence Day was in 1777, six years before Americans knew whether the new nation would even survive the war, and fireworks were a part of the revels. In 1789, George Washington’s inauguration was accompanied by a beautiful display.
Throughout the following years, as the benefits of this new and booming nation came within the grasp of large numbers of citizens, Americans’ growing self-confidence infused them with the spirit of celebration. With this turn, fireworks became more popular than ever. Starting even in the late 18th century, politicians used displays to attract crowds to their speeches.
In 1892, a 400-year celebration of Columbus landing on our shores lit up the Brooklyn Bridge. Over one million people witnessed the event which was considered the greatest show ever seen in the Western Hemisphere.
Among the very recent magnificent displays, of course, have been the 1976 Bicentennial in the Nation’s Capital, the 1983 Brooklyn Bridge Centennial, the Macy’s extravaganzas, the inaugurations of Presidents Ronald Reagan, George Bush and Bill Clinton, annual Independence Day celebrations and many more.
But all stand in shadow of the 1986 celebration of the Fourth of July and the 100th anniversary of the Statue of Liberty. The skies lit up over New York Harbor and the Statue of Liberty on July 4, 1986, with a dazzling fireworks display destined to surpass any others held in this country, or the world.

The “Statue of Liberty Centennial Fireworks Spectacular” was an international display, with fireworks from many different countries including Japan, China, Germany, Italy, England, France, Spain, Canada, Australia, Taiwan and Brazil. Many were developed especially for this international program, never before seen anywhere in the world. Approximately 22,000 aerial fireworks were launched from over 30 barges and other vantage points, and an additional 18,000 “set pieces” – ground pictures, fountains, colorful low displays – were seen, stretching from the East River, around the tip of Manhattan, up into the Hudson River, and around the Statue of Liberty and Ellis Island.
The production required an estimated 220 miles of wires, 777,000 pounds of mortar tubes (through which sky rockets and aerial bombs were launched) 30,000 pounds of in sundry equipment and staff of at least 100 pyrotechnics on the sites to produce the displays. The men responsible for producing this colossal event are among the most famous in the fireworks industry: George Zambelli, president, Zambelli Internationale, Inc., Newcastle, Pennsylvania; Felix Grucci, Jr., president, Fireworks by Grucci, Inc., Bellport, New York; and Robert A. Souza, president of Pyro Spectaculars of Rialto (Los Angeles), California. Known as fierce competitors in the industry, they never before worked as a “triad”, yet for this event worked closely for nearly a year, designing and planning the largest and most magnificent display in the world in honor of Independence Day and Miss Liberty’s 100th anniversary.
Fireworks have been with Americans since the nation’s very beginnings, and now more fireworks and ignited for the Fourth of July than for any other national celebration in the world.