Home World U.S. News Jodi Arias sports prison stripes in court appearance as she is behind...

Jodi Arias swapped the prim collared shirts and business-like attire that she sported throughout her lengthy murder trial for the standard issue stripes now that she is behind bars as a convicted murderer of her ex-boyfriend Travis Alexander.

Jodi Arias, 32, made her first court appearance since the jury was dismissed after they were unable to decide whether she deserved life in prison for the murder of Travis Alexander or if she should be given a death sentence.

The procedural hearing lacked the sizzle of the five-month trial that attracted a global following and had spectators waiting in line in the middle of the night to get a coveted seat in the courtroom.

Last week, the courtroom was about two-thirds full, the hearing was not televised, and there were no arguments in open court. 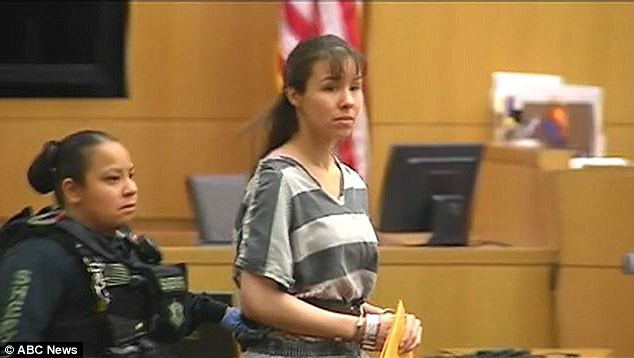 Prosecutors have the option of taking the death penalty off the table, and Judge Sherry Stephens would then sentence Jodi Arias to one of two punishments: life in prison or the more unlikely life in prison with the possibility of release after 25 years.

He had previously said he is confident an impartial jury can be seated to determine Jody Arias’ punishment but added that he is open to input from defense lawyers and the victim’s family about possibly scrapping a new trial in favor of a life sentence for Arias.

Meanwhile, after losing motions for mistrials, appeals to higher courts and efforts to quit the case altogether, Jodi Arias’ attorneys tried a new tactic this month, appealing to the court of public opinion while hoping to influence Bill Montgomery’s decision.