Protesters are gathering in Cairo’s Tahrir Square on the eve of a mass rally to demand the resignation of Egypt’s President Mohammed Morsi.

As darkness fell, thousands of people could be seen milling in the square, focus of the protests which brought down his predecessor, Hosni Mubarak.

Sunday is the first anniversary of Mohamed Morsi’s inauguration as president.

Tensions has been high ahead of rally. At least three people – including a US citizen – died in unrest on Friday.

Washington has warned Americans not to travel to Egypt.

Protesters are unhappy with the policies of the Islamist president and his Muslim Brotherhood allies. 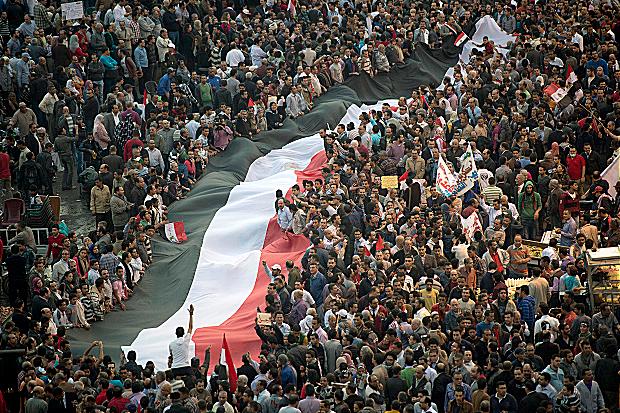 Thousands of supporters of Mohamed Morsi, who was elected by a small margin, rallied in the capital on Saturday.

President Barack Obama has said America is “looking with concern” at the situation.

Opposition activists say more than 22 million people have signed a petition seeking a snap election. They have urged the signatories to come out on Tahrir on Sunday.

Flags and tents form a base camp on the square from where protesters plan to march President Mohamed Morsi’s office.

Amr Riad, 26, told Reuters news agency: “We’re peaceful but if those who come at us are violent we’ll defend ourselves.”

Speaking in South Africa, Barack Obama urged “all parties to make sure they are not engaging in violence and that police and military are showing appropriate restraint”.

“We would like to see the opposition and President Morsi engage in a more constructive conversation about [how] to move their country forward,” he said.

Reports say that Cairo International Airport has been unusually busy as both expatriates and Egyptians leave the country.

On Friday, US national Andrew Pochter and another man were killed in the northern Egyptian city of Alexandria as protesters stormed an office of the Muslim Brotherhood.

Andrew Pochter, who was in the country to teach English to children and improve his own Arabic, was killed apparently while using a mobile phone to take pictures.

His family said in a statement that he had been stabbed by a protester while observing demonstrations.

The other fatality in Alexandria on Friday was an Egyptian man who was shot dead, according to medical sources.

Another man, said to be a journalist, was killed by an explosion in Port Said and five other people were injured.

President Mohamed Morsi earlier this week offered a dialogue – a move rejected by his opponents.

Mohamed Morsi, who hails from the Muslim Brotherhood, became Egypt’s first Islamist president on 30 June 2012, after winning an election considered free and fair.

His first year as president has been marred by constant political unrest and a sinking economy.