The Arctic Monkeys performed at the Pyramid Stage in front of more than 90,000 fans closing the Glastonbury Festival’s first night.

Opening with a brand new song, Do I Wanna Know, they also rattled through crowd-pleasing hits like I Bet You Look Good On The Dancefloor.

Frontman Alex Turner also led the crowd in a chorus of Happy Birthday to his mum, Penny, who was at the festival.

They were joined on the bill by Jake Bugg, Rita Ora and Dizzee Rascal, as the weather largely stayed dry.

The 24-year-old had to sit on a stool after nearly collapsing on stage.

“I’m not going to let this get the better of me, especially when there are so many beautiful people here,” she told the audience.

“If I pass out, will someone give me mouth to mouth.”

Later, she told the NME she had “nearly died” and blamed the incident on diabetes.

“I didn’t eat before my set like a smart, good diabetic does and I remember not being able to feel my arms,” she said.

The Arctic Monkeys made a low-key entrance on the Pyramid Stage – with none of the pyrotechnics or showbiz affectations of the festival’s last headliner, Beyonce, two years ago.

In keeping with the slow-burning groove of their new single, the band set opened with subdued lighting and darkened video screens, before crashing straight into the heavier, faster Brianstorm, a single from 2007. 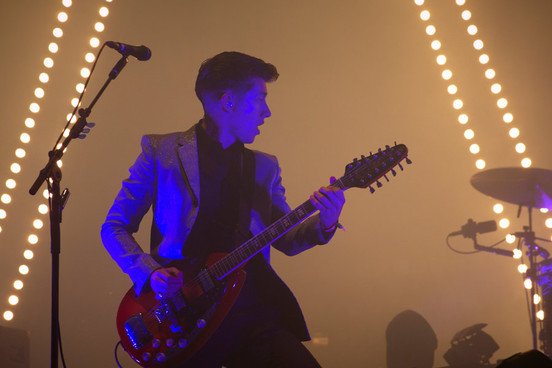 The Arctic Monkeys performed at the Pyramid Stage in front of more than 90,000 fans closing the Glastonbury Festival’s first night

More confident as a frontman than the last time the band headlined Glastonbury in 2007, Alex Turner squared up to the mic and adopted an exaggerated Elvis swagger when addressing the crowd.

“We’re gonna play all night long,” he informed them.

“Does that sound good to you?”

Songs from their first two albums – I Bet You Look Good On The Dancefloor, Fluorescent Adolescent, Sun Goes Down – received the warmest response, while new material was tolerated with good humor.

A string quartet, arranged by Elbow’s Guy Garvey, joined the band for the encore, playing Mardy Bum and Cornerstone.

The set ended with early track 505 and a wall of feedback.

Earlier, Liam Gallagher’s band Beady Eye kicked off the action with an unscheduled appearance on The Other Stage at 11:00 BST.

The early morning set was something of a turnaround for the singer, who previously headlined the event with Oasis in 1995 and 2004.

The latter appearance was particularly flat, and Liam Gallagher claimed the festival was “full of idiots”.

But after Friday’s show, he said: “Glastonbury’s back in the good books. I just had a bad experience but now it’s cool again.

He added that playing before lunchtime had been something of a risk.

“I thought 11 o’clock could be really ropey but I thought we done well, man.”

Musical legends could be found dotted around the site on Friday, with Sinead O’Connor headlining the acoustic stage and Nile Rodgers of disco pioneers Chic on the West Holts Stage.

The musician, whose hits include Chic’s Le Freak, Diana Ross’s Upside Down and Madonna’s Like A Virgin, was playing his first ever Glastonbury.

“I come from America, right, so in our heads it all started with Woodstock and Monterey Pop – and Glastonbury has kept that tradition alive.

“Now I’m actually here I can come home and either dispel the myth or say <<wow, it’s everything I thought>>,” he said.

Mercury Prize-winners Alt-J also drew a large audience to The Other Stage, and surprised them all by ditching their smart, intricate rock songs for a cover of Kylie Minogue’s Slow.

Jake Bugg pulled off an early “Glastonbury moment” with an energetic set that climaxed with his hit Lightning Bolt; while Dizzee Rascal provided a canny mix of crowd-pleasing hits and new material, including his Robbie Williams-featuring single Going Crazy.

With an audience of 180,000 music fans, many artists look forward to Glastonbury as the pinnacle of the festival season – and anticipation was particularly high after the event took a year off in 2012.

“I’m never going to forget this,” declared pop star Rita Ora as she left the stage.

“You have changed my life.”

Rapper Professor Green, who followed her on the Pyramid Stage, said he was similarly amazed to be part of the line-up.

Describing himself as “some little toerag from Hackney who samples INXS”, he described his booking as “mental”.

Professor Green, 29, whose hits include Read All About It and the INXS-based I Need You Tonight was also aware of the opportunity the stage – and the accompanying TV coverage – presented.

“I think a lot of people that are here won’t know my music, bar the singles, so this is a good opportunity to show the musicality of what we do when we play live,” he said.

With more than 2,000 performers over the weekend, rumors of “secret appearances” are always rife at Glastonbury, and this year’s crop range from the likely (Fatboy Slim and Radiohead’s Thom Yorke) to the fanciful (Daft Punk and David Bowie).